Seven girls aged between 12 and 20 years drowned in a pond at a village in Jharkhand's Latehar district on Saturday during 'Karma Puja' festivities, a senior official said. 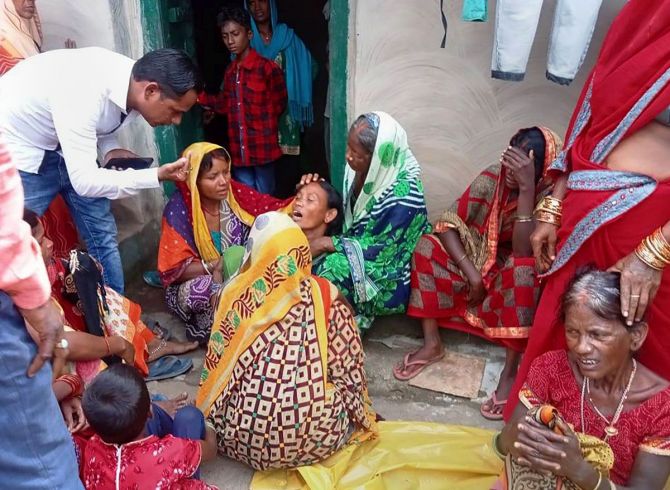 IMAGE: Family members of seven girls who drowned in a pond during immersion after Karma Puja, at Bukru village in Latehar district, on Saturday. Photograph: PTI Photo

The tragedy occurred at Bukru village under Shregada within Balumath police station limits when the girls had gone to the pond for immersion after Karma Puja, a major festival in Jharkhand, Deputy Commissioner Abu Imran said.

The Deputy Development Commissioner of the district, Shekhar Verma has been asked to hold an inquiry, Imran said.

'Shocked to hear about the death of seven girls due to drowning during 'Karam dali' (branch of Karam tree) immersion at Sheregada of Latehar district.

'May God grant peace to the departed souls and give strength to the bereaved families to bear the loss,' Soren said in a tweet.

Commissioner, Palamu Range, Jatashankar Choudhary said the incident occurred during immersion of the 'Karam dali' and the bodies of the girls, who drowned while trying to save each other, were sent to the Latehar district hospital.

As soon as the news about the tragedy spread, the festivities gave way to mourning, and wails of distraught family members could be heard at many homes outside which sullen crowds collected.

According to officials, a group of 10 girls from the village had gone to the pond with 'Karam Dali' for immersion when two of them started drowning and shouted for help.

In an effort to save each other, seven of them drowned in the deep pond while three other girls are undergoing treatment.

Officials said after hearing their desperate cries, villagers rushed to their rescue.

"Four girls died on the spot while three others breathed their last on way to Balumath CHC," they said.

All seven were students in local schools and colleges.

Latehar DC said all help will be extended to the affected families. Member of Parliament from Latehar Sunil Singh expressed deep shock over the incident.

Meanwhile, agitated villagers have blocked the Balumath-Chatra road - National Highway No 98, protesting over the incident.

Officials said the situation was under control and they were trying to persuade the villagers to lift the blockade.

Karma is a major festival in Jharkhand related to worship of mother nature and is celebrated with great enthusiasm, mostly by tribals.