Source: PTI
November 16, 2011 11:59 IST
The Delhi High Court on Wednesday granted five days parole to Manu Sharma, serving life term in Tihar Jail for killing ramp model Jessica Lall in 1999, on the condition that he will not visit night clubs or discotheques during the period.

Allowing Sharma's plea to attend his younger brother's marriage, Justice V K Shali granted the temporary relief to him from November 21 to November 25.

"The petitioner (Sharma) is allowed to be released on parole for five days but he shall not visit any night club or discotheque," Justice Shali said, directing Sharma to surrender before the Tihar Jail superintendent soon after his parole period expires.

The court confined the parole to Chandigarh, Karnal and Ambala and asked Sharma to furnish the residential addresses of these three places to the jail superintendent.

The court further asked him to furnish a personal bond of Rs 50,000 and a surety of like amount before the jail superintendent.

Senior counsel Ram Jethmalani, appearing for Sharma, had earlier submitted before the court the schedule for marriage ceremonies which include pre-marriage function of 'ladies sangeet' on November 21 at Chandigarh, marriage at Karnal on November 22 and reception in Ambala on November 24.

The police had earlier objected to Sharma's plea, saying his past conduct does not entitle him as he was found indulging in brawl in a discotheque when he was out on parole.

It later gave a nod for his parole release, saying he should give an undertaking that he would not leave Karnal, Ambala and Chandigarh, where key marriage ceremonies are slated.
Source: PTI© Copyright 2021 PTI. All rights reserved. Republication or redistribution of PTI content, including by framing or similar means, is expressly prohibited without the prior written consent.
Related News: Manu Sharma, Karnal, K Shali, Jessica Lall, Ambala
Print this article
'No opposition for bail to cash-for-vote scam accused' 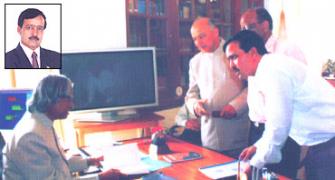 Extraordinary Indians: He works in India's MOST troubled zones
'Communal card played to justify crack down at Ramlila maidan'

2G: HC notice to CBI on bail pleas of Kanimozhi, 4 others