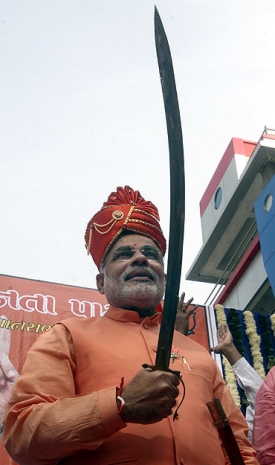 The Janata Dal-United on Sunday slammed the "autocratic personality cult" in the Bharatiya Janata Party, without taking any name, in a strident criticism of Narendra Modi and the party leadership's decision to elevate him as its poll campaign chief.

The JD-U in a resolution adopted before walking out of its 17-year-old alliance with the party leading the National Democratic Alliace said the anointment of the Gujarat chief minister as chairman of BJP's election campaign committee for the next Lok Sabha elections did not augur well for the health of the country's "secular and democratic polity."

The three-page resolution was passed after a one-and-a-half-hour-long meeting of party members of Parliament, members of Legislative Assembly, ministers and other leaders presided over by Sharad Yadav at 1, Anne Marg, official residence of Chief Minister Nitish Kumar.

The resolution dwelt on the current political situation and the circumstance pushing them to sever ties with the BJP. "The Goa announcement of the chairmanship of the electoral campaign committee of BJP has filled all of us with deep apprehensions about the future. It has left not a shadow of doubt that this is a mere ceremonial prelude to his nomination as the prime ministerial candidate.”

"All efforts within the BJP to suggest care and moderation in the process were smothered with the authoritarian cult and imperious disdain. Needless to say that these developments do not augur well for health of our secular and democratic polity," it said.

Making a veiled attack on his Gujarat counterpart, Nitish said that people like late Pramod Mahajan and Arun Jaitley had also headed the campaign committee of the party in the past. But the language used by the new BJP campaign committee chief after assuming the post sounded "frightening" for a section of society, he told reporters.

The resolution spoke of what the JD-U called a rapid rise in the "growing hegemonic control" of a leadership that does not represent the characterstics, which we had emphasised for the continuation of the alliance. "The increased dominance of this leadership in the party with the intentions of thrusting its decisions on its alliance partners. The growing intolerance to any voice of dissent and moderation in its decision making process. The same autocratic personality cult with scant respect for democratic decision making process has led to the demise of the Vajpayee-Advani era of more tolerant accommodating and inclusive model and framework partnership," the resolution added.

"In our political resolution on April 14 we had emphasised that new leadership of the NDA namely the proposed incumbent for the prime ministership be declared in advance based on consistent past practice and who should have following attributes: A governance policy for inclusive rapid social and economic growth.”

“Acceptable high secular credentials with no rough edges or divisive characteristics and multi ethnic society like ours. Be sensitive towards an accelerated development of more backward states and will reiterate the continued commitment of the three basic principles contained and agreed in the national agenda of governance," the resolution said.

The resolution recalled the JD-U had also said that since the BJP was the major participating partner of the NDA, the onus to announce the PM candidate rested with them and that such a nominee be announced at the earliest and certainly by the end of the year.

"However to our dismay and grave disappointment, the events of the recent days have rapidly moved in the opposite direction. Within the BJP there have been ominous developments,” it said.