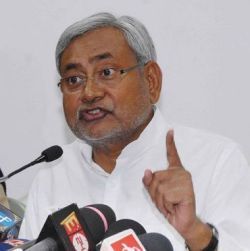 Both the leaders were for sometime making statements against party leaders, including Bihar Chief Minister Nitish Kumar.

The letter of suspension issued by the party says that Yadav suspended both the MPs using the power vested in him under section 20 of the party constitution.

Ram had on Tuesday made certain remarks against Nitish Kumar in connection with the fodder scam.

Ram has not spelt out his future plans clearly but he had met a close aide of Modi a few weeks back.

While Nishad hails from the OBC community of fishermen, Ram is a Dalit leader and BJP has been courting them as it seeks to expand its vote base in Bihar ahead of Lok Sabha elections which it will fight on its own after its split with JD-U in June.

Both leaders have a history of switching political loyalty. Nishad was in Lalu Prasad's RJD and BJP earlier before joining JD-U while Ram was once a minister in Prasad's cabinet in Bihar.