The women's reservation bill is back in focus ahead of Parliament's winter session, with several opposition parties, including the Janata Dal-United, which had once opposed the move, demanding that it be introduced and passed in this session. The bill, which seeks to reserve one-third of seats for women in the Lok Sabha and state legislative assemblies, was first introduced in 1996. Thereafter, it was introduced several times. The bill was passed in the Rajya Sabha in 2010, but it lapsed after the dissolution of the 15th Lok Sabha in 2014.

Any bill pending in Lok Sabha lapses with the dissolution of the House. Bills pending in Rajya Sabha are put in the "live register" and remain pending.

The demand for the introduction and passage of the bill was raised in two key meetings on Tuesday -- an all-party meeting called by the government ahead of the Winter session and the Business Advisory Committee (BAC) of Lok Sabha meeting chaired by Speaker Om Birla.

The demand was also raised in the BAC meeting by TMC leader Sudip Bandyopadhyay and Congress leader Adhir Ranjan Chowdhury.

The Dravida Munnetra Kazhagam, Shiromani Akali Dal and the JD-U supported them and demanded that an all-party meeting be convened to build consensus on the issue.

"The demand was raised in the Lok Sabha BAC meeting by several parties and we even suggested the government that it should call an all-party meeting to build consensus on the issue," Bandyopadhyay told PTI.

Echoing him, SAD leader Harsimrat Kaur Badal said it was high time that the bill should be passed and women given their due.

JD-U leader Rajiv Ranjan Singh, whose party had fiercely opposed the bill in the past demanding that reservation for OBC and SC women within this one-third quota, said, "It is time to empower women and the government should bring this bill and we will support it."

On a few occasions, some parties and MPs have raised in Parliament the demand for passage of the women's reservation bill, but so many parties are raising the issue in unison after several years. 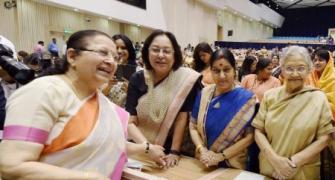 It's time to deliver on women's bill, say female MPs
Why the women's bill is fatally flawed
Women's Bill: 14 years of ruckus and torn papers 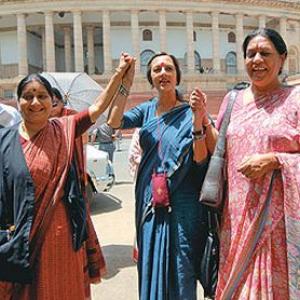 Why the vote on the women's bill is important