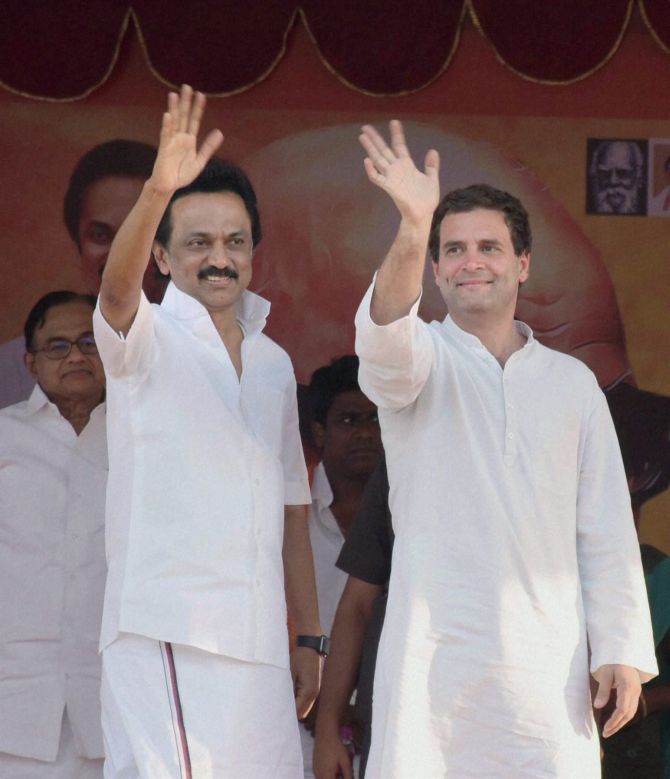 Taking on All India Anna Dravida Munnetra Kazhagam supreme Jayalalithaa, Congress vice president Rahul Gandhi on Saturday alleged that she preferred to ‘stay within four walls’ without bothering to visit the people or listen to their grievances during last year’s devastating floods.

Attacking the Tamil Nadu chief minister over a host of issues, including unemployment, he alleged that her rule was marked by corruption and that industries had migrated to other states.

Addressing his maiden election rally in Madurai for the May 16 assembly election in Tamil Nadu along with DMK Treasurer M K Stalin, he targeted Jayalalithaa over the unprecedented floods that hit parts of the state, including Chennai, during last monsoon.

“Tamil Nadu does not need a government which is run by a person who stays within four walls and does not even have the decency to come out and see what has happened when the floods came to Chennai.

“I could come from Delhi to see what has happened in Tamil Nadu and to help, to give a hand to the poor people but the chief minister could not walk out of her house,” Gandhi said.

He claimed that under the AIADMK regime, unemployment had risen. Lakhs of youth were unemployed and corruption had gone up ‘at every level’, he charged.

Previously, factories and industries ‘used to come to Tamil Nadu, but now nobody is interested’, he said, adding they ‘understand’ that if they wanted to open up industries ‘they will have to pay money’ to people in the government.

Referring to a generation of leaders from ‘Periyar' E V Ramasamy, K Kamaraj, AIADMK founder M G Ramachandran and Dravida Munnetra Kazhagam chief M Karunanidhi, he said such leaders went to the people, listened and learnt from them.

“I am confident Stalin also has these qualities. On the other side, we have the chief minister who is absolutely convinced that she does not need to meet anybody in Tamil Nadu,” the Congress leader said.