Jaya set to return as CM, calls for MLAs meet on May 22 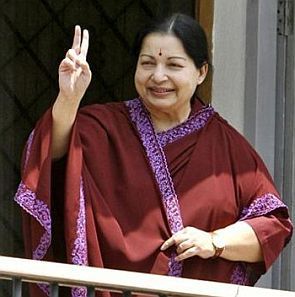 All India Anna Dravida Munnetra Kazhagam chief Jayalalithaa is all set to return as Tamil Nadu chief minister for the fifth time following her acquittal in the disproportionate assets case and has convened a meeting of her party MLAs on May 22.

"Jayalalithaa will be elected unanimously as leader of the AIADMK legislature party in a meeting to be held on May 22 at party headquarters in Chennai," a top AIADMK source told PTI.

Earlier, in a brief press release, announcing the MLA's meeting, Jayalalithaa said, "All MLAs should participate in the meeting without fail."

Sources said Jayalalithaa will stake claim to form the government and assume office of chief minister anytime between May 22-24.

Incumbent Chief Minister O Panneerselvam's Cabinet will resign after getting the instructions of party chief at the appropriate time, they said.

Jayalalithaa first became the chief minister in 1991 with a huge majority in a sensational election which was held after the assassination of former Prime Minister Rajiv Gandhi near Chennai by a woman Liberation Tigers of Tamil Eelam suicide bomber on May 21, 1991.

Her second stint was from 2001-06 and during this period she was in the thick of handling several issues including the strike of state government employees.

In 2011, she assumed the coveted post of chief minister for the third time trouncing the arch rival DMK which was hit by the 2G spectrum scandal.

On September 27 last year, a trial court in Bengaluru convicted her in the 19-year old disproportionate assets case which led to her disqualification as an MLA and exit as chief minister.

Her trusted lieutenant O Panneerselvam assumed charge as stop-gap chief minister. In similar circumstances, he took on the mantle of chief minister in 2001 and made way for his party supremo Jayalalithaa in 2002.

Decks were cleared for Jayalalithaa's return as Tamil Nadu chief minister after the Karnataka high court on May 11 acquitted her in the assets case.

The court had set aside her conviction by the trial court and the four-year jail sentence awarded to her and three others.