Pic of jawan abducted by Maoists surfaces on social media

A photograph of Rakeshwar Singh Manhas sitting in a hut was purportedly released by Naxals who abducted the CoBRA commando after a fierce gun battle in the Bastar region of Chhattisgarh on April 3 in which 22 security personnel lost their lives. 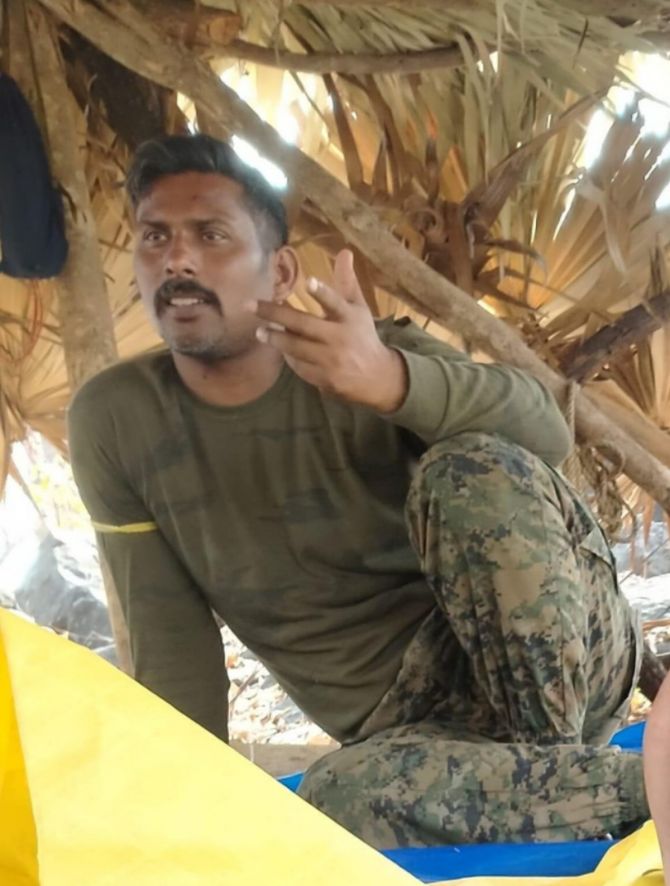 In this photograph, which is being circulated on social media, Manhas, a commando with the 210th CoBRA battalion of the Central Reserve Police Force (CRPF), is seen sitting in a hut alone without any Naxal in the frame.

When asked about this photograph, Inspector General of Police (Bastar range) Sundarraj P told PTI on Wednesday, "We are closely monitoring the situation. All best possible efforts are being made to secure the safe return of the jawan."

On Tuesday, the outlawed CPI-Maoist had issued a statement in Hindi saying its cadres had abducted Manhas from the site of the ambush and demanded that the Chhattisgarh government appoint interlocutors to ensure his safe release.

The state government has so far not reacted to the demand.

In the statement, which was issued in the name of Vikalp, spokesperson of the Dandakaranya Special Zonal Committee (DKSZC) of Maoists, the Naxals had also said that Manhas will be released after the government names mediators.

"He will remain safe in our captivity till then," it had said.

The Maoists, however, had not raised any formal demands for the release of the commando.

The police had said the authenticity of the statement was being verified.

In a bid to obtain leads on the whereabouts of Manhas, the police are carrying out searches and also contacting local villagers, social organisations, public representatives and journalists, an officer had said on Tuesday.

Meanwhile, tribal activist Soni Sori has left for the encounter site on Wednesday to appeal to Naxals to release the abducted jawan.

"The government should have taken some steps by now to secure the release of the jawan. I cannot wait now. I just want that that jawan should be freed safely for which I am going to the incident site," Sori told reporters.

Manhas was part of a squad that had gone for an anti-Naxal operation in the jungles on the Bijapur and Sukma border on the night of April 2, hours before the deadly ambush.

On Saturday, a gunfight broke out between security forces and ultras between Tekalguda and Jonaguda villages in which 22 troopers were killed and 31 others injured.

Out of the 22, the Central Reserve Police Force (CRPF) lost eight personnel, including seven CoBRA commandos and one jawan of its 'Bastariya' battalion, eight from the DRG and six from the Special Task Force.