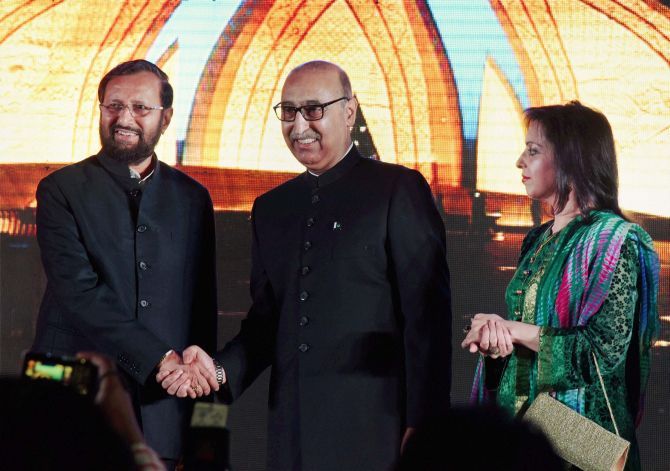 Union minister Prakash Javadekar on Wednesday attended the Pakistan Day celebrations in New Delhi where the hardline and moderate Hurriyat factions pitched for adopting a ‘political approach’ to resolve the Kashmir imbroglio and denounced the ‘brutal attitude’ of the Narendra Modi dispensation at the Centre.

Javadekar was at the event, where presence of his ministerial colleague V K Singh last year had drawn flak from the media, for around 20 minutes, and extended his ‘best wishes’ to the Pakistani people on the sidelines.

Chairman of the moderate faction of Hurriyat Conference Mirwaiz Umar Farooq said he had expected the current Bharatiya Janata Party-led dispensation to follow the ‘Vajpayee policy’ towards Kashmir, but the Modi government ‘hardened’ its position.

Farooq said any dialogue bereft of involvement of the three parties -- Hurriyat, Kashmiris and Pakistan -- would not succeed in resolving the issues faced by the restive border state.

“We were expecting that the BJP would go back to the Vajpayee policy. But till now there has been no such indication. On the contrary, it has hardened its position. The Kashmir issue is not any economic or law and order issue, it’s a political issue. Till the time a political approach is taken, there would not be any progress,” he told reporters at the event hosted at the Pakistan High Commission.

Hardline separatist leader Syed Ali Shah Geelani, who was also present, said the Modi government was no different from the United Progressive Alliance dispensation which also had a ‘brutal attitude’ towards Kashmir.

“India portrays itself as a democratic nation. But its behavior with the minority communities including Muslims, Sikhs, Dalits paints the opposite picture,” he said.

Asked about the delay in government formation in the state owing to differences between the People’s Democratic Party and the BJP, both Farooq and Geelani described it as a ‘minor’ issue that would not have any effect in resolving the ‘actual problems’.

“It seems government will be formed. But it’s not a big issue as to who forms government in Kashmir. The real question is whether the government that will be formed will be able to do anything concrete. And that anyway will have to be decided by the Centre on whether it will adopt a political or military approach.

“Hurriyat believes initiaves are needed where AFSPA (Armed Forces (Special Powers) Act) goes, human rights violations are ended, bunkers, watch towers are removed. But there is no such initiative towards that end. We are not against any government formation per se, “Umar said.

Pakistan High Commissioner Abdul Basit said his country has been through ‘many phases and challenges’, but the enormous "resilience" of the Pakistani people has kept it going towards achieving democracy, stability and prosperity.

“Pakistan has made tremendous strides in all spheres. And given our geographical location Pakistan is destined to become a regional economic hub as we straddle West Asia, Central Asia and South Asia. And in this aspect, China-Pakistan economic corridor will be hugely important,” he said.