Bharatiya Janata Party leaders from a dominant farming community in Haryana and western Uttar Pradesh held separate meetings on Wednesday to chalk up an outreach to members of the Jat community and caste councils (khaps) to counter the narrative against the Centre's three farm laws. 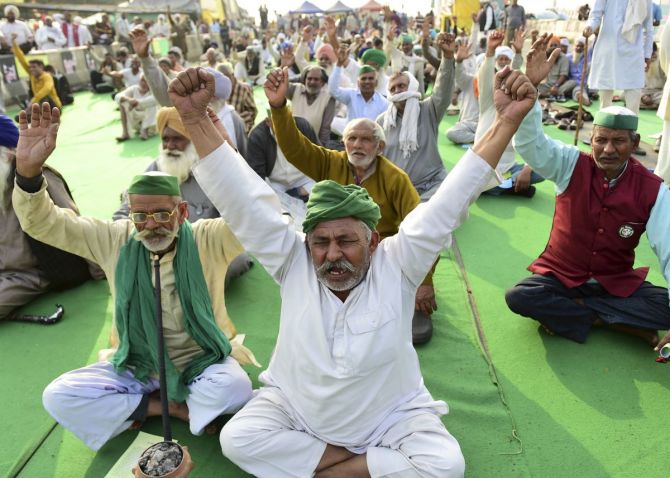 The party has alleged that the farmer agitation against these laws has been made an emotive issue for the Jat community by a section of people to further their political ambitions.

In follow-up to the meeting, leaders, mostly belonging to the community in western UP and Haryana, met separately on Wednesday to chalk up further plan.

Union minister Sanjeev Balyan, who represents Muzaffarnagar in western Uttar Pradesh in Lok Sabha, coordinated the meeting of BJP leaders from the region and it was attended by the party's vice-president Saudan Singh and state minister Bhupendra Singh Choudhary.

"We will go to the farming community in our areas.... They are our own people and we belong to them. We will give them patient hearing and convey them benefits of the three new farm laws. And if they have some issues (with regard to the laws), the Centre has maintained they are ready for amendments," Balyan told PTI after the meeting.

He said issues related to sugarcane price and electricity bill are more relevant to farmers in the region and the government has been working on resolving these while many of them have been resolved.

Responding to a question on khap panchayats, Balyan said his party leaders have been meeting chiefs of the councils.

"When we will sit and listen to them and convey them the actual benefits (of the laws), then definitely something will come out.

"In western UP, there are other issues related to farm laws which are more relevant but some people have made it an emotional issue," Balyan said.

The meeting of Haryana BJP leaders held in Gurgaon was chaired by state party chief O P Dhankar and attended by party MPs, MLAs and ministers in the state government.

Sources present in the meeting said a plan has been chalked up to counter the narrative against the three farm laws propagated by those predominantly subscribing the Communist ideology, by reaching out to the entire farming community, especially the Jats.

It has become important for the party to take control of the situation as the sympathisers of farmers' protest have up to an extent succeed in linking the movement against one specific dominant community in the state by evoking emotions, they said.

The party's top brass told these leaders to go to the people and clear misconceptions and misgivings about the three new farm laws, the sources said.

Most of the BJP leaders from these states feel that the agitation took an emotive turn when Bharatiya Kisan Union leader Rakesh Tikait cried and denied to leave the protest site at Ghazipur on the Delhi-Uttar Pradesh border.

With khaps in Haryana, western Uttar Pradesh and in some areas of Rajasthan playing a crucial role and throwing their weight behind the ongoing farmers' agitation, the BJP top brass on Monday told party MLAs, MPs and other leaders from these states to proactively reach out to them.

They were also asked to make the government's position vis-a-vis the new farm laws clear to the khaps.

They were also asked to reach out to the farmers in their areas and clear any misconceptions about the farm laws, party sources said.

Farmers, mostly from Punjab, Haryana and Uttar Pradesh, are protesting at Delhi's borders against the laws since November 28 last year and demanding they be withdrawn.

They are protesting against the Farmers' Produce Trade and Commerce (Promotion and Facilitation) Act, the Farmers (Empowerment and Protection) Agreement on Price Assurance and Farm Services Act, and the Essential Commodities (Amendment) Act.

The government has maintained that the laws will benefit the farmers.

The government has held 11 rounds of negotiation with protesting farmers and these have remained inconclusive.