'Jallikattu' kicks off amid fanfare in TN, 62 injured 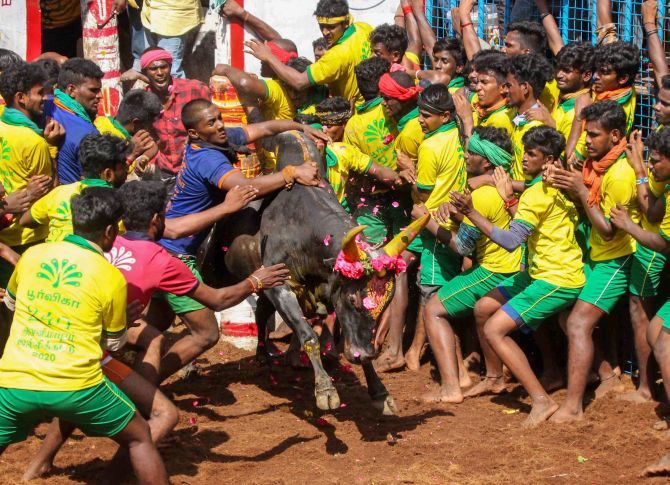 'Jallikattu,' the annual bull taming event slated to be held in several parts of Tamil Nadu got off to a colourful start in Madurai on Wednesday, the Pongal day, in which 641 bulls and 607 tamers took part.

As the feisty bulls, one after the other started racing towards the lengthy sporting arena from the entrance, known as 'vadivasal,' young men waiting with bated breath strained every nerve to latch on to the hump of the animals.

Interestingly, as many as 397 bulls of the total 641 that entered the arena could not be dominated by tamers and these animals emerged successful, an official told PTI.

'Don't touch the horns', 'many men don't chase one animal', 'allow the bull to go; it has won', were among the instructions that reverberated in the arena for participants.

The Jallikattu at Avaniapuram held in Madurai on Wednesday marks the start of the once a year bull taming sport in many rural and semi-urban regions of Tamil Nadu.

Similar events will be held at Palamedu on Thursday and in Alanganallur on January 17 and these are among the hugely popular bull taming contests in the state.

If the participant hangs on to the hump of the bull for a determined distance, he is declared a winner and if not, the animal emerges the victor.

In each of the nine rounds, about 60 to 70 participants with colour coded T-shirts and shorts took part.

Festivity marked the event and scores of spectators from the gallery craned their necks to have a glimpse of determined men trying to get the better of the animals in a matter of seconds as soon as they were released into the arena.

A huge number of spectators, including many foreign tourists with cameras, were glued to the event.

Keenly watching the game, organisers quickly declared-over the public address system- if the animal or the man was the winner and the prize.

The sporting arena was barricaded from the enclosures marked for spectators.

The official said medical examination of both the men and animals decided their participation.

He said 62 men were injured, including 34 participants and 28 spectators, of whom eight were referred to the Government Rajaji Hospital.

However, no bull was injured, he added. Out of the total of 730 bull tamers who were issued tokens, five were rejected for consumption of alcohol and only 607 participated in the event.

"As regards bulls, due to paucity of time only 641 could take part" and 118 could not. Eight animals were disallowed for reasons like restlessness, the official said.

Elaborate security arrangements were made and access to medical facilities were made readily available.

The event was held under the supervision of a panel, led by a retired judge.

A majestic and massive bull which scared participants and which was barely touched, also grabbed prizes.

Three men who successfully held on to a high number of animals - between 10 and 14 bulls- were awarded the first three prizes.

Others who dominated fewer or a single animal successfully were given a variety of prizes, including vessels and silver coins.