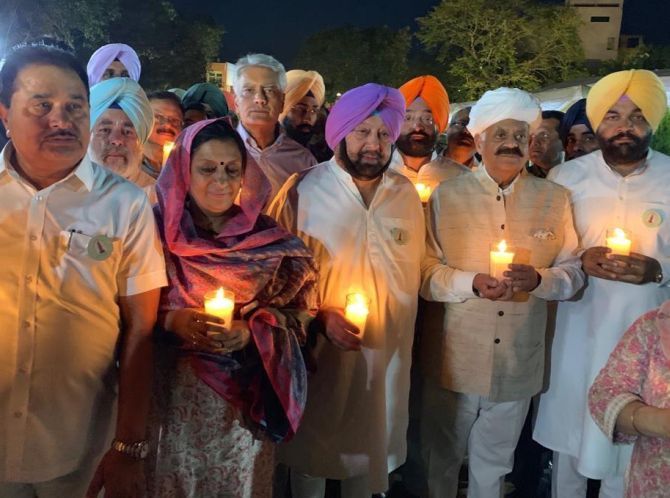 Punjab Chief Minister Amarinder Singh on Friday termed as 'inadequate' the expression of regret by British Prime Minister Theresa May on Jallianwala Bagh massacre and said that nothing short of a formal apology from Britain will do.

On the eve of the centenary of the gruesome incident, Singh and Punjab Governor V P S Badnore led hundreds of people from all walks of life who took out a candle march to pay homage to the martyrs.

The march started from the historic Townhall and culminated at the Jallianwala Bagh Memorial as slogans like 'Inquilab Zindabad' rent the air.

Amarinder Singh said that Jallianwala Bagh massacre was a heart-wrenching moment in India's history and the people of country want an 'unequivocal apology from Britain for the atrocity'.

Nothing short of a formal apology will do, the chief minister said.

The Punjab assembly had passed a resolution in this regard, he pointed out, adding that the tragedy was one of the most horrific examples of colonial excesses and a moral blot on the face of Britain.

Theresa May had on Wednesday described the Jallianwala Bagh massacre in Amritsar as a 'shameful scar' on British Indian history as she marked the 100th anniversary of the tragic incident, but she stopped short of a formal apology.

The massacre took place in Jallianwala Bagh in Amritsar on Baisakhi in April 1919 when troops of the British Indian Army under the command of Colonel Dyer opened fire on a crowd of people holding a pro-independence meeting, leaving hundreds of people dead and scores injured.

"The candles that were lit on Friday evening here have rekindled memories of the sad day and would serve as a reminder of the sacrifice which has inspired patriotism and nationalism among generations of Indians," Chief Minister Amarinder Singh said.

Amarinder, who will pay floral tributes on Saturday at the Jallianwala Bagh Memorial along with Congress President Rahul Gandhi, also met the families and descendants of some of the martyrs.

Demanding apology from Britain, descendants of some of those killed have said mere regret would not do.

"My mama-ji (maternal uncle) Mela Ram was martyred at the age of 18 in the massacre," said 86-year-old Krishana Chohan, recounting how she grew up hearing tales about the incident.

"When the troops started indiscriminate firing on the peaceful gathering, everybody panicked, people started running helter-skelter without having any understating where to go.

"It was plain ground and there was only one exit, which was a narrow lane. As a result, there was a stampede and many fell upon each other and some fell inside the well in the ground," she told PTI.

She said her uncle was one of those who fell inside the well.

"His body bore bullet marks, I was told. Some freedom fighters who were addressing the gathering were also found dead," she said.

Chohan said the British government should apologise for the incident and a mere regret would not do.

Mahesh Behl, 73, recalled the killing of his grandfather Lala Hari Ram, an advocate, in the massacre.

He lamented that descendants like him even did not get the due honour from the central or the state governments.

"A few years ago, the Punjab government gave us freedom fighter card, but nobody recognises this card. Even the card is rejected at toll plazas. Our children didn't get any reservation on the basis of this card in any educational institution," he rued.

"Today after 100 years of the incident, the administration approached us to invite for the candle light march being organised by the state government on the centenary eve," he added.

Legislator and Punjabi Ekta Party chief Sukhpal Singh Khaira said thousands of Punjabis had sacrificed their lives for the freedom of the country and the massacre in Jallianwala Bagh is an unforgettable tragedy.

He said the Jallianwala Bagh memorial was a neglected place and reflects apathy of state and central governments.

He also demanded apology from the British government for the massacre.