News
Business
Movies
Sports
Cricket
Get Ahead
Money Tips
Shopping
Sign in  |  Create a Rediffmail account
Rediff.com  » News » Jaitley unlikely to be a minister in new govt on account of ill health 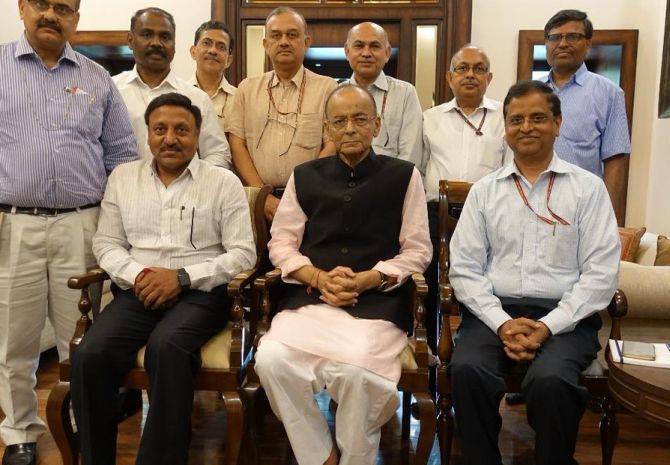 Union Finance Minister Arun Jaitley is unlikely to be a part of Prime Minister Narendra Modi's Cabinet in the Bharatiya Janata Party-led National Democratic Alliance's government's second term due to his ill health, which may require him to travel to either the United Kingdom or the United States for treatment of an undisclosed illness, sources with knowledge of the matter said.

Jaitley, 66, has become 'very weak' as his health has deteriorated over the past few weeks, sources said, adding that he has developed some throat condition as well that prevents him from speaking for long.

He was admitted to All India Institute of Medical Sciences earlier this week to undergo tests and treatment for an undisclosed illness and was discharged on Thursday but did not attend celebrations at BJP headquarters that evening after the party's emphatic victory in the general elections.

Sources said Jaitley is not keen to take up a ministerial position in the new Modi government and may have conveyed his unwillingness to hold any position, such as a minister without portfolio, to Modi.

Doctors treating him have advised him to go to the UK or the United States for treatment, they said.

Jaitley, whose health has been on a decline ever since he underwent a kidney transplant in May last year, will take a call in the next few days on the issue.

He has not attended office for the last three weeks and has rarely been seen in public. He, however, has been writing blogs and tweeted on Modi's victory on Thursday.

He did not attend the Cabinet meeting called on Friday that recommended dissolution of the 16th Lok Sabha.

Sources said that he, however, met all the five secretaries in his ministries at his residence in what was described as a routine meeting.

While as a finance minister he steered through Parliament major economic legislations such as the nationwide Goods and Services Tax (GST) -- which had languished for nearly two decades, he has also played key role in getting through several other laws such as the bill to ban the Muslim instant divorce practice known as 'triple talaq'.

One of the most prolific voices in the Modi government and a key strategist, Jaitley did not contest the current Lok Sabha elections presumably because of his ill health.

He had undergone surgery in the US on January 22 for a reported soft tissue cancer in his left leg, an illness that deprived him from presenting the Modi government's sixth and final budget of its current term. Railway and Coal Minister Piyush Goyal was the stand-in finance minister who presented the interim budget for 2019-20.

Jaitley had returned to India on February 9 after undergoing skin grafting.

He is believed to had undergone some kind of a medical procedure again when he last month visited the US to attend the International Monetary Fund-World Bank Group Spring Meetings.

Jaitley had undergone renal transplant on May 14 last year at AIIMS, New Delhi, with Goyal filling in for him at that time too. Jaitley, who had stopped attending office since early April 2018, was back in the finance ministry on August 23, 2018. 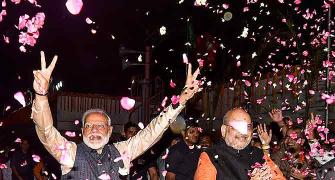 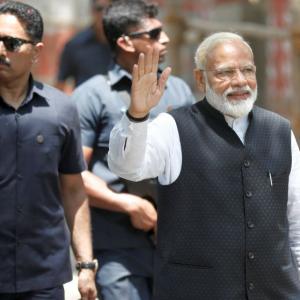