The government took the decision to send the Central Bureau of Investigation's two senior officers on leave on the Central Vigilance Commission's recommendation to protect the integrity of the investigating agency, Finance Minister Arun Jaitley said on Tuesday, describing the action as "perfectly bonafide". 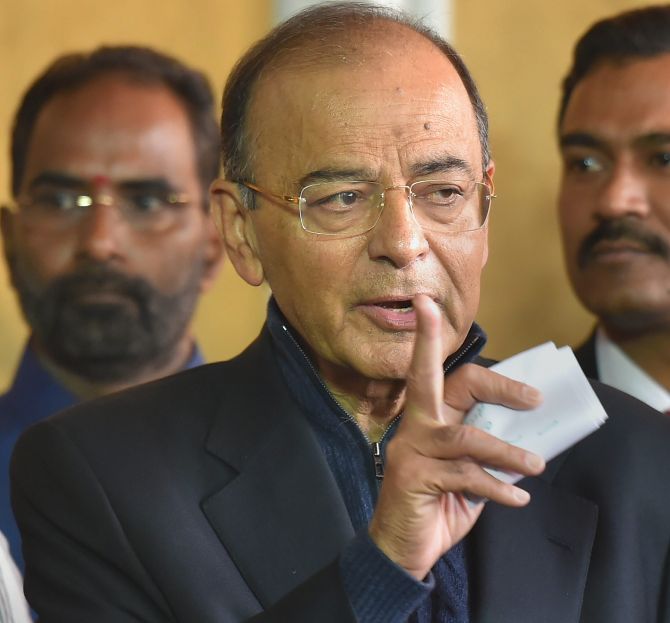 Jaitley, who was speaking to reporters in the Parliament complex after the Supreme Court gave orders to reinstate CBI director Alok Verma, said the government would comply with the orders of the apex court.

"The government took this decision to protect the integrity of the CBI... Government took the action of sending two senior officers of CBI on leave on CVC's recommendation," he said, referring to the decision to send Verma and CBI Special Director Rakesh Asthana on leave.

The decision by the government on the issue was completely legal as the two officers in question were at loggerheads, he said.

"This action taken was perfectly bonafide as there were cross-allegations made by both the officers, and in accordance with recommendations of the CVC. The government felt that in the larger interest of fair and impartial investigation and credibility of CBI, the two officers must recuse themselves," the finance minister said.

He said the court has referred the matter to the committee to decide on the issue within one week.

"The court apparently has strengthened the immunity given to the CBI director in the larger interest of the fair and impartial working of the CBI. At the same time, the court has devised an accountability mechanism. The directions of the court will obviously be complied with," he said.

Jaitley also pointed out that the government's decision on the issue was not against any particular individual.

"The government had accepted the CVC recommendations with full honesty and today a reinterpretation on the matter has been given by the SC today and we will take action according to the order," he said, adding that the CVC was an independent body and submitted its recommendations to the SC.

Verma had challenged the government's October 23 order sending him on forced leave and appointing an interim chief, arguing that the CBI chief has a fixed two-year term and can be removed only by the high-powered committee.

"The CVC had exercised its power under the power of superintendence. We've not read the judgement of the SC, but it could be a view that the court has taken. That if superintendence results in the chief relinquishing his powers temporarily then the jurisdiction of the committee comes into play.

"Therefore, the court has referred the matter to that committee to decide on that issue within one week. And in accordance with the directions of the court it will be complied with and the government will act in the same manner. The government is not biased," Jaitley said.

The Supreme Court reinstated Verma, setting aside the Centre's decision to divest him of his powers, but restrained him from taking any major policy decision till the CVC probe into corruption charges against him is over.

The apex court said any further decision against Verma who retires on January 31, would be taken by the high-powered committee which selects and appoints the CBI director.

'If Modi has any moral conscience, he should quit'

Narendra Modi is the first premier to have "his illegal orders set aside by the Supreme Court", the Congress said on Tuesday while the Communist Paty of India-Marxist asked for the prime minister's resignation after the apex court reinstated CBI director Alok Kumar Verma.

Other parties, including the Rashtriya Janata Dal and the Peoples Democratic Party, joined in to say the apex court had dealt a big blow to the government.

"Modiji adds another 1st to his list. After being the first PM to be exposed destroying the #CBI before the SC, After having ruined CVC's credibility (requiring supervision by former SC judge),Mr. Modi has now become 1st PM to have his illegal orders set aside by the SC," tweeted Congress' chief spokesperson Randeep Surjewala.

He asked Modi to remember that governments had come and gone but the integrity of institutions had survived.

He also linked the government's "illegal decision" on the issue with the Rafale fighter jet deal and the situation in the Reserve Bank of India as well as in the Supreme Court.

"Another big question for Modiji. After making #CBI Chief suffer the consequences of your illegal decision for 3 months, will you show the courage to return three months of lost tenure? Unless you are afraid of investigation into #RafaleScam!"

Playing on the prime minister's name, Surjewala dubbed Modi as one who stood for “Muzzling of Democratic Institutions (MODI).

Accusing Modi of destroying the credibility and competence of the CBI and the CVC, he also asked whether this was his model of "minimum governance, maximum government".

"1st, you lose 4 economic advisors in a row including 2 RBI Governors, 2nd, 4 SC judges go public on Judge Loya, Then you destroy credibility & competence of the CBI & CVC. This is ur model of ‘minimum governance, maximum govt'," he tweeted.

His colleague, Mallikarjun Kharge, who is also part of the high powered committee said the order was a lesson for the government.

"We're not against one individual and welcome the SC's judgement... Today, you'll use these agencies to pressurise people, tomorrow somebody else will, What will happen to democracy then?" Kharge asked while speaking to reporters outside Parliament.

According to CPI-M general secretary Sitaram Yechury, Verma's reinstatement by the Supreme Court was a "direct indictment" of Modi and his office.

"Will he take responsibility for this blatantly illegal act? If he has any moral conscience he should quit. Accountability, anyone or is it just #jumlas?" Yechury asked on Twitter.

"Modi govt has ruined all institutions and democracy in our country. Wasn't CBI director illegally removed at midnight to stall the probe in Rafale scam which directly leads to PM himself?" the Aam Aadmi Party chief asked on Twitter.

"(It) reinstates belief in independent institutions of our democracy that are its pillars," Mehbooba said in a tweet.

The former Jammu and Kashmir chief minister said the Centre should now stop "misusing" investigating agencies like the CBI and the National Investigation Agency for political ends.

"Time for the Central gov to stop misusing its influence to arm twist investigative agencies like (the) NIA & CBI for political vendetta," she added.

Speaking to reporters outside Parliament, Rashtriya Janata Dal MP Manoj Jha described the order as a "big slap" on the face of the government.

Delivering its order, the apex court said any further decision against Verma would be taken by the high-powered committee which selects and appoints the CBI director.

The judgement was pronounced by a bench of Chief Justice of India Ranjan Gogoi and Justices S K Kaul and K M Joseph.