External Affairs Minister S Jaishankar on Wednesday met Ukrainian Prime Minister Denys Shmyhal at the UN headquarters in New York and apprised him of India's principled position that emphasises cessation of all hostilities and return to dialogue and diplomacy. 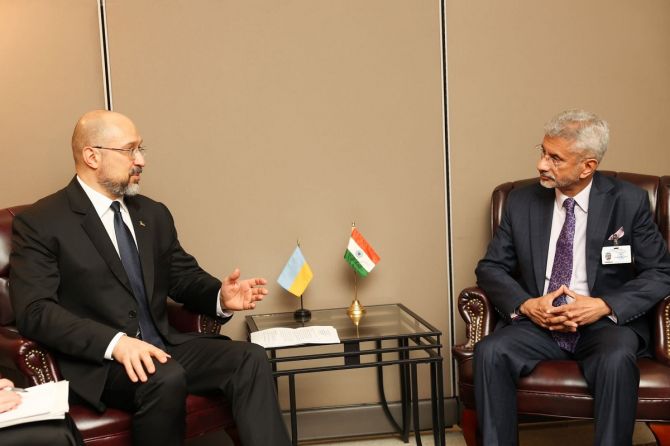 Jaishankar met the Ukrainian leader on the margins of the high-level UN General Assembly session in New York, hours after Russian President Vladimir Putin ordered a partial mobilisation of some 300,000 reservists, saying the move was essential to protect Russia's sovereignty as the "West is seeking to weaken, divide and finally destroy this country."

"At the UN Headquarters this morning, called on Prime Minister of Ukraine @Denys_Shmyhal," Jaishankar tweeted.

Jaishankar said he apprised Prime Minister Shmyhal of "India's principled position that emphasises cessation of all hostilities and return to dialogue and diplomacy."

The minister thanked "him for sharing his perspectives and assessment of the ongoing conflict. Discussed their consequences, including for food security, energy security and safety of nuclear facilities."

Jaishankar assured him that India would continue to provide humanitarian assistance.

Russian Defence Minister Sergey Shoigu on Wednesday disclosed that a total of 5,937 Russian troops have died during the military operation in Ukraine while fatalities on the Ukrainian side are ten times higher, with 61,207 Kiev troops killed.