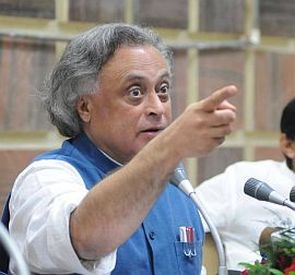 Union minister Jairam Ramesh on Tuesday attacked the Central Bureau of Investigation for initiating preliminary enquiry against ex-SEBI chairman C B Bhave and ex-member K M Abraham on the issue of granting sanction to MCX Stock Exchange, and alleged that "larger forces" were working to fix them.

"This type of a fishing expedition by the CBI is detrimental to decision making in the public domain," Ramesh said, dubbing the CBI action as "completely wrong".

Noting that the prime minister has the "highest regard" for Bhave's integrity, the Union Rural Development Minister hailed Abraham as "one of the most honest officials".

Strongly coming out in their support, Ramesh termed as "shocking" and "atrocious" the CBI case against the two officials. The preliminary enquiry was registered against Abraham and Bhave last week on issues of alleged irregularities in granting sanction to the MCX-SX by the Securities and Exchange Board of India (SEBI) in 2008, and renewing the recognition in 2009 and 2010.

"I know that he (Bhave) was personally recruited in SEBI by (its former chairman) G V Ramakrishna. I know that the prime minister has the highest regard for his integrity. Bhave is one of the most outstanding Indian Administrative Service officers. He brought integrity to our capital market. Abraham is one of the most diligent, one of the most honest, one of the most straight forward officers you can think of. I am  absolutely shocked and appalled at the manner in which the CBI has moved against them," Ramesh said reacting to a query on the matter.

Asked whether they have been fixed in the case, Ramesh said, "I think there seems to be larger forces at work here..."

The probe by CBI is to ascertain how MCX-SX was granted permission despite opposition by SEBI when Bhave was head of the regulatory authority. The CBI's enquiry has also named Jignesh Shah-founded Financial Technologies India Ltd and its commodity exchange arm MCX.