As many as 11 legislators, who resigned from the Andhra Pradesh Council of Ministers on April 7, will be re-inducted when Chief Minister Y S Jagan Mohan Reddy reconstitutes his cabinet in Amaravati on Monday. 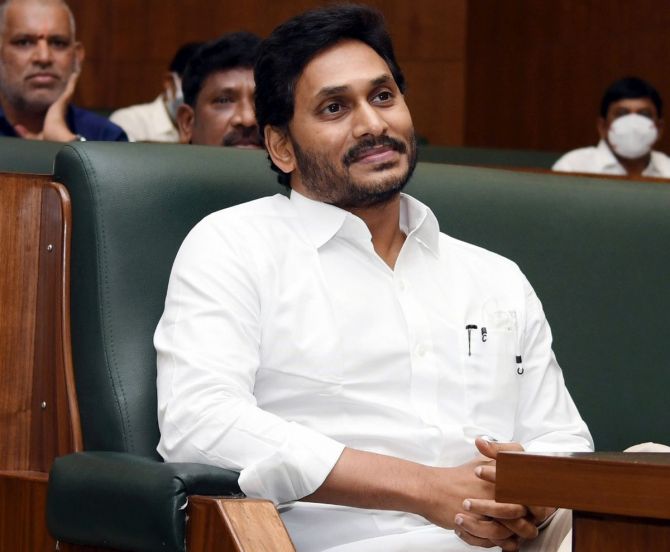 The reconstituted cabinet will have 13 new faces while a veteran will make a come back after a long gap.

As per norm, the AP cabinet can have 26 members, including the chief minister.

The new cabinet will be constituted on Monday, with the Governor administering the oath of office and secrecy to 25 members at a function starting at 11.31 am.

Names of cabinet ministers, who would be sworn-in on Monday, were not officially released but the chief minister's own media house Sakshi put out the list on Sunday evening.

Sakshi later made one change and came up with a fresh list, which the ruling Yuvajana Sramika Rythu Congress sources said 'could be the final'.

Veteran legislator Dharmana Prasada Rao from Srikakulam district, who previously served as a minister under various chief ministers, is being taken into Jagan's new Cabinet in the place of his elder brother Dharmana Krishna Das, who was the Deputy Chief Minister (Revenue).

Amzath Basha Shaik Bepari and K Narayana Swamy, who served as deputy chief ministers in the previous cabinet, will also be re-inducted.

Seniors like Botsa Satyanarayana, P R C Reddy, P Viswaroop and Buggana Rajendranath are being given a fresh chance.

The composition of the fresh cabinet, as the names revealed, clearly indicated that Jagan wilted under pressure while picking his new team that would lead the party to the 2024 general election.

Jagan went back on his word of replacing '90 per cent of the incumbent ministers' and giving an 'opportunity to freshers' as he is set to retain at least 40 per cent of his first cabinet.

The cabinet revamp also fomented discontent in the YSRC with several senior legislators venting out their displeasure over being denied a cabinet berth.

In fact, a senior like Balineni Srinivasa Reddy, who just stepped down as minister, did not show signs of cooling down when Jagan's emissary S R K Reddy sought to placate him over denial of a continuance.

Balineni, a relative of Jagan, was peeved not so much over having to quit the Cabinet but more over the re-induction of A Suresh, a colleague from Prakasam district.

At one point, Jagan seemed to have acceded Balineni's demand and dropped Suresh from the list, instead proposing to give the slot to the latter's uncle Thippe Swamy from Sri Satya Sai district.

Subsequently, however, Jagan included Suresh's name in the fresh list, much to the chagrin of Balineni.

This, party sources maintained, was to ensure representation to Prakasam district that otherwise would have gone unrepresented in the new cabinet.

Senior legislators like Pinnelli Ramakrishna Reddy, Kotamreddy Sridhar Reddy, Samineni Udayabhanu and many others were also sore over being left out.

In Macherla, elected representatives of local bodies, owing allegiance to Pinnelli, threatened to quit their posts if their leader was not given a cabinet berth.

Sridhar Reddy, a three-time MLA, said he would continue to sail with Jagan though he was bitter over denial of a cabinet berth.