Home Minister Amit Shah asserted in Lok Sabha on Saturday that the government has done more for Jammu and Kashmir since Article 370 was scrapped in August 2019 than those who ruled it for generations, even as he assured that the Centre will grant full statehood to the union territory at an appropriate time. 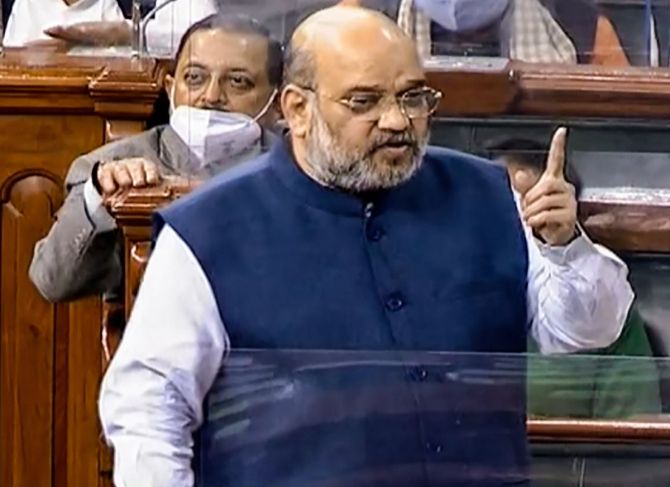 Replying to a discussion on the Jammu and Kashmir Reorganisation (Amendment) Bill, he also slammed some Opposition members for their claim that the proposed law negates the hopes of the region getting back its erstwhile statehood.

The bill to merge the Jammu and Kashmir cadre of all-India services officers with the Arunachal Pradesh, Goa, Mizoram Union Territory cadre was later passed by Lok Sabha by a voice vote.

The Jammu and Kashmir Reorganisation (Amendment) Bill, 2021 has already been passed by Rajya Sabha. It replaces an ordinance issued last month.

This legislation has nothing to do with statehood, and Jammu and Kashmir will be accorded the status at an appropriate time, Shah said.

He took a swipe at the Congress and other parties -- which had backed Article 370 of the Constitution that gave special status to Jammu and Kashmir -- saying this was a temporary provision but they continued with it for over 70 years before the Modi government annulled it.

Jammu and Kashmir has been a top priority for the current government since it took power in 2014, he said.

Chowdhury had claimed that foreign delegations were being taken to the region, no all-party delegation was sent.

The home minister also gave the assurance to the people of Jammu and Kashmir that "no one will lose their land". The government has sufficient land for development works, Shah said.

Decentralisation and devolution of power have taken place in the union territory following the revocation of Article 370, Shah said, noting that panchayat elections saw over 51 per cent voting. Panchayats have been given administrative and financial powers for local development, something they lacked earlier, he added.

Now people chosen by the masses will rule Jammu and Kashmir, not those born to "kings and queens", he said, attacking dynastic parties in the region.

Even our rivals could not allege any wrongdoing in these polls which were conducted fairly and peacefully, he said.

Work on two AIIMS in the region has begun, and the Kashmir Valley will be connected to the railways by 2022, the Union home minister said.

Attacking the Opposition, he said while they were seeking a report card from the government about the development of Jammu and Kashmir since the abrogation of Article 370 in August 2019, "have you brought a report card of what you have done in the last 70 years".

Shah said the government expects that around 25,000 government jobs will be created in Jammu and Kashmir by 2022.

Replying to Asaduddin Owaisi, he said 4G services are resumed not under pressure of any foreign government.

Criticising Owaisi, he said the AIMIM leader was creating a divide between Hindu and Muslim officers.

Citing certain developmental projects, he said by 2022 we will be providing rail connectivity to Kashmir valley.

Since the imposition of President's rule in Jammu and Kashmir, the government has almost completed the work of giving electricity to every house.

Shah said the government has changed the land laws to facilitate setting up of industry. "We are providing Rs 13,000 per month cash assistance to those 44,000 displaced Kashmiri families who have 'Rahat Cards'," he said adding they were displaced because Congress had failed to provide them security.

"We should not do politics on Jammu and Kashmir and Ladakh. There are several issues over which politics can be done. These are sensitive places and people have suffered a lot. We need to assuage their feelings," he observed.

Participaing in the discussion earlier, Owaisi said the bill will further alienate the Muslims and Kashmir. He also sought to know about the number of youths from the Valley arrested under the Public Security Act.

Manish Tewari of the Congress said when the government says the statehood will be restored, the bill to merge the J&K cadre with AGMUT is a contrary step.

Shah explained that states such as Mizoram, Goa and Arunachal Pradesh are part of the cadre and the suggestion is unfounded.

Attacking Chowdhury for his comment that the cadre should be local and officers having ground knowledge should be appointed there, Jamyang Namgyal, BJP MP from Ladakh, said when local officers were appointed the Valley on the same logic, there was no let up in cases of terrorism.

He said when it came to promoting locals it was not applied to the Valmikis, Gorkhas and those came from west Pakistan.

Namgyal said the move will ensure that efficient and experienced officers will be able to work in Ladakh and even officers from the UT can work in other parts of the country.