J-K leaders vow to fight for restoration of Article 370

Leaders from Jammu and Kashmir on Thursday said after attending Prime Minister Narendra Modi's all-party meeting that they will 'continue to struggle' against the abrogation of Article 370 and urged the PM to restore the statehood of J-K at the earliest. 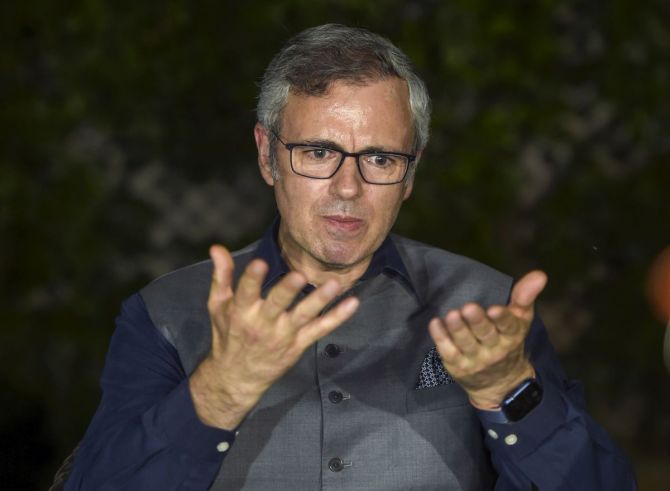 National Conference president and former chief minister Farooq Abdullah said the PM must work towards building trust in Jammu and Kashmir by ensuring that its full statehood is restored.

Talking to PTI immediately after the crucial meeting chaired by the prime minister in New Delhi, Abdullah said his National Conference would continue to challenge through legal and constitutional means the abrogation of special status of Jammu and Kashmir under Article 370 of the Constitution.

"There is a loss of trust which needs to be restored immediately and for that, to begin with, the Centre should work for restoration of complete statehood to Jammu and Kashmir," Abdullah, who is a Lok Sabha member, said.

"I conveyed to the prime minister that the statehood means reverting even the IAS and IPS cadres of Jammu and Kashmir. The state has to be in totality," he said after the meeting that lasted for over three hours.

The NC chief, who was accompanied by his son and former chief minister Omar Abdullah, said it was vital for the Centre to restore the identity of Jammu and Kashmir at the earliest so that other democratic exercises could be carried forward.

Omar said at the meeting that the NC does not accept the decision to abrogate Article 370 and will fight against it in the court.

Speaking to the media after the meeting, Omar said 'there has been a breach of trust between Jammu and Kashmir and the Centre' and it is the Union government's duty to restore it.

"As it was an open discussion, we have put our views openly. We told the prime minister that we don't stand with what was done on August 5, 2019. We're not ready to accept it.

"But we won't take the law into our hands. We will fight this in court, and hope that we'll get justice there," he said.

"The prime minister listened to us in a good and peaceful environment. We told him that it is important to reverse the decisions that were taken and are not in favour of Jammu and Kashmir," he added.

The former chief minister said Jammu and Kashmir was given the status of a Union Territory and 'people don't like it'.

Omar said all leaders who participated in the meeting demanded full statehood for Jammu and Kashmir.

"Both prime minister and home minister said the work for elections and restoring statehood should start soon.

"However, Azad Sahib said that first statehood should be restored and then elections should be held. On this, the prime minister didn't say anything," he added.

Meanwhile, People's Democratic Party chief Mehbooba Mufti said that she has told the PM that people of Jammu and Kashmir do not accept the manner in which Article 370 was abrogated 'unconstitutionally, illegally and immorally'.

Speaking to mediapersons after the three-and-a-half-hour-long meeting, Mufti said, "People of Jammu and Kashmir are in a lot of difficulties after August 5, 2019. They are angry, upset and emotionally shattered. They feel humiliated.

"I told the prime minister that people of Jammu and Kashmir do not accept the manner in which Article 370 was abrogated unconstitutionally, illegally and immorally."

The PDP chief said that they will struggle peacefully even if it takes months or years.

"People of Jammu and Kashmir will struggle constitutionally, democratically, peacefully. Be it months or years, we will restore Article 370 in Jammu and Kashmir as it is a matter of our identity. We did not get it from Pakistan, it was given to us by our country, by Jawaharlal Nehru, Sardar Patel," she said.

This was the first meeting between the Centre with the political leaders of the region after the abrogation of Article 370 in August 2019 and bifurcation of Jammu and Kashmir into two union territories.

The PDP president said that she congratulated the prime minster over holding talks with Pakistan, which reduced infiltration in the union territory, and added that the government should instead talk about the halted trade.

"I congratulated him that they talked to Pakistan and it led to ceasefire, less infiltration. For peace of Jammu and Kashmir if they have to talk to Pakistan again, they should.

"They should also talk to Pakistan about trade with them that has halted, it is a source of employment for many," she said. 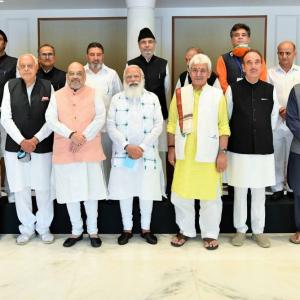 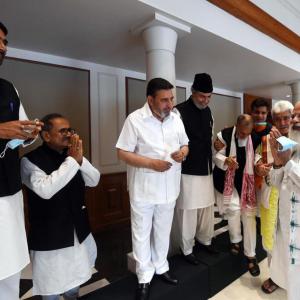