Kapil Sibal, a prominent member of the Congress's group of 23 leaders who wrote to party chief Sonia Gandhi seeking organisational overhaul last year, on Thursday slammed fellow letter signatory Jitin Prasada for crossing over to the Bharatiya Janata Party and said it represented politics of "prasada" or personal gains. 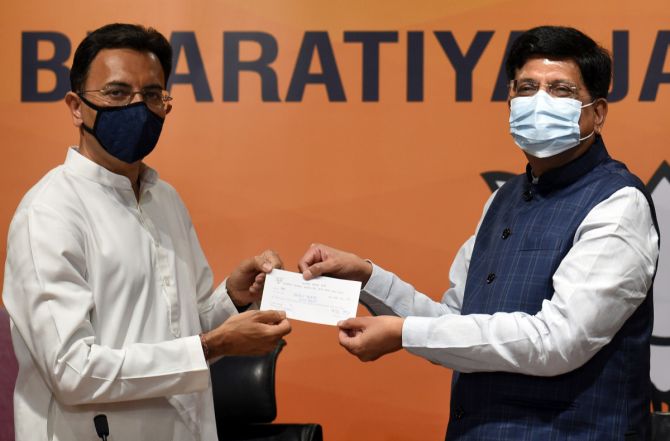 The veteran Congress leader also said hypothetically if his party thinks of him as "dead wood" or of no utility, he may think of leaving, but would never join the BJP, asserting that such a switch could only happen "over my dead body".

In an interview with PTI, Sibal said if Jitin Prasada would have left the party unhappy over the response of the leadership on the concerns raised by the letter writers that would have been his personal choice and he was entitled to leave, but wondered why he decided to join the BJP.

"What is the rational basis for that except for 'prasada’ (personal gain) politics...We see this happening around the country," Sibal asserted.

Asked about the reforms not being implemented which he along with 22 other leaders had sought from the party, Sibal said that is for the top political leaders to decide and that at this stage he has no comments to offer.

"As long as we are in the Congress and we continue to embrace its ideology, I think all 22 of us, now that we are 22, and many more who were not part of the signed document will continue to raise our issues to strengthen the Congress and where we want the party to go and be the grand old party it was," he said.

"And if they tell me at any point in time that they don't need me, I will decide what to do, but as I said I will not join the BJP... Over my dead body," the senior Congress leader asserted.

In a tweet earlier, Sibal had said the question is will Jitin Prasada get "prasada" from the BJP, or is he just a 'catch' for UP elections.

In such deals if 'ideology' doesn't matter changeover is easy, he tweeted.

Slamming Jitin Prasada's switch to the BJP and his hailing the saffron party, Sibal told PTI that the norm in politics now is "Prasada will go for prasada".

"From Aaya Ram Gaya Ram we are into 'prasada’ (personal gain) politics. We saw this happening recently in West Bengal where en masse people left the Trinamool Congress and joined the BJP in the hope that they will contest on a BJP ticket and win because Amit Shah was claiming 200 plus for the BJP. When they faced defeat, they all want to go back to the TMC," Sibal said.

'Aaya Ram, Gaya Ram' was an expression used widely in politics in the 1990s referring to the frequent floor-crossing and switching of parties.

Hitting out at switchovers by leaders to the BJP in various states, Sibal said all this shows that there is no concept of principled politics in this country as witnessed in West Bengal, Madhya Pradesh and Karnataka, among other places.

"It is all about prasada. How much prasada you are going to get, no regard for ideology. My criticism of what he (Jitin) has done is not that he has left the party; I cannot criticise him for that, that is his personal decision... but how does he justify to himself joining the BJP," he said.

"It is a party he (Jitin) abused for decades. He himself said that his association with the Congress and its ideology was for several decades. How then does he justify joining an ideology which he has opposed for three decades," Sibal asked.

The former Union minister said what concerns him is the way ideology is being put aside across the country. He cited the example of Haryana and the absence of any rationale in the coalition of the Chautalas and the BJP. It is just lust for power, he alleged.

Pressing his point, Sibal cited the example of the US and the UK, saying the Republicans may be in trouble at this moment but they are not joining the Democrats in America and the same was true of the Labour party and the Conservatives in the UK.

"Members of Parliaments in Europe do not indulge in such acrobatic switches for personal gain. Those too are functional democracies. Democracy in this country has become dysfunctional because it is not based on ideology," Sibal said.

The fight for power should be based on the clash of ideologies and not on personal "prasadas", he asserted.

Asked if he could ever think of leaving the party he has been with for decades, Sibal said "If the party considers that I have no value for it I might think of leaving it, but I would never join the BJP. This is because I am wedded to a particular ideology."

"Politics is not for personal gain, embracing ideologies which members of a party do not believe just for a Rajya Sabha seat or a position in the party or some other position. That is not my idea of politics," he asserted.

Expressing concern over the increasing trend of leaders switching between diametrically opposite ideologies, Sibal said the other real problem is that when people look at politicians behaving in this fashion they believe that these politicians are untrustworthy, unprincipled and have no ideology.

Sibal also slammed the BJP for welcoming “prasada politics'. Its actions are equally unprincipled, he added

Asim Kamal in New Delhi
© Copyright 2021 PTI. All rights reserved. Republication or redistribution of PTI content, including by framing or similar means, is expressly prohibited without the prior written consent.