It's like looking for women in men's hockey team: RSS on Rahul's remark

"The Sangh had decided way back that it will work in the midst of men, and it has the right to decide this," RSS spokesperson Manmohan Vaidya said. 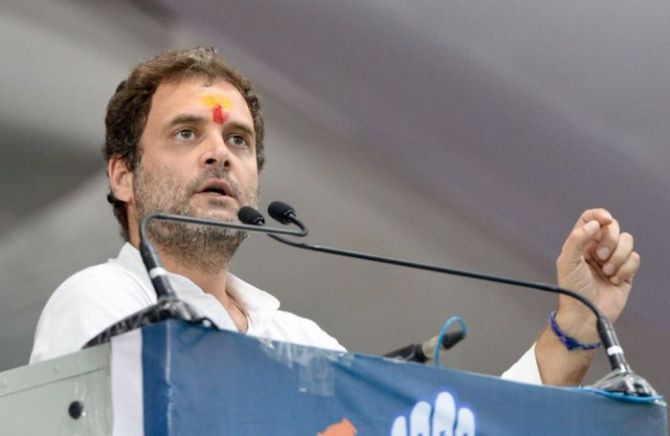 The RSS said Gandhi's remark was like looking for women in a men's hockey team.

"On a serious note, the thing is that the people, who are scripting his (Rahul's) speeches don't understand the Sangh properly. The Sangh has been working since the past so many years and its work is different," RSS spokesperson Manmohan Vaidya said when asked by reporters to comment on Gandhi's remarks.

Gandhi, while addressing a gathering of students in Vadodara in Gujarat on Tuesday, had alleged that the RSS discriminates against women.

"How many women are there in the RSS?... Have you ever seen any woman in 'shakhas' wearing shorts? I have never seen," the Congress leader had said in a sarcastic tone.

Referring to Gandhi's statement, Vaidya, in a lighter vein, said, "Asking about women in RSS shakhas is like trying to look for women in a men's hockey team. If someone wants to see women, he should go and watch a women's hockey match."

He said, "The Sangh had decided way back that it will work in the midst of men, and it has the right to decide this. I don't know whether Rahul has asked the question showing concern for the Sangh or women."

"He (Gandhi) should not be concerned about the Sangh. The Sangh will take care of itself. Sangh's work is expanding. And if he is concerned about women, he should do (address) it through his party," Vaidya said.

"RSS works for character building and social welfare through its over 50,000 shakhas daily. We don't have any competition in this field," he added.

Vaidya also criticised the Congress and said it is losing its support base.

"The RSS works for the upliftment of the people and it is growing day-by-day, while the Congress is losing its ground. The Congress should work towards strengthening itself instead of looking at the RSS," he added.

"When Rahul Gandhi's grandmother (Indira Gandhi) and father (Rajiv Gandhi) were powerful...and were in power, the Sangh was targeted. But what damage did it do to the Sangh?" he asked.

"We are not a political party...Fight with your rival, the BJP," the RSS spokesperson told the Congress.