It's an attack on police force, says Maha CM after Muslim cop is mobbed in Latur

Maharashtra Chief Minister Devendra Fadnavis on Wednesday said the attack on policemen in Latur district is an attack on the entire police force and such acts will not be "tolerated" in the future. 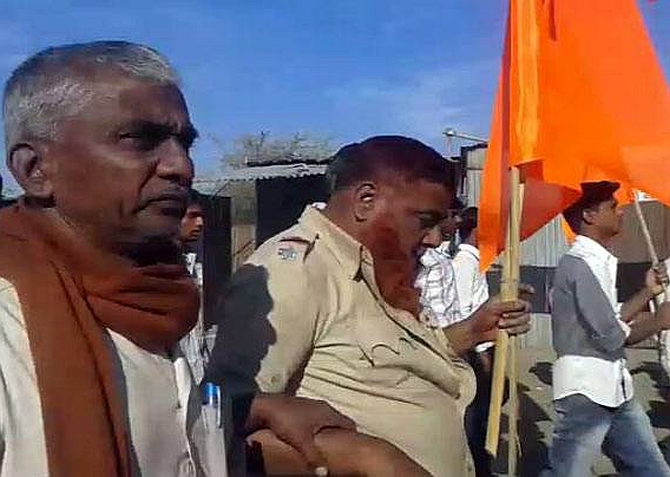 "I have told the DG Police and Minister of State for Home to visit Pangaon in Latur," he said.

"The government feels that it is not an attack on an individual but on the (police) force. Won't tolerate such act," the CM tweeted.

Sixteen people have been arrested so far in connection with the assault on two policemen in Latur when they prevented them from putting up a flag at a spot in Pangaon village.

Meanwhile, Inspector L V Rakh, of Renapur police station near Pangaon, has been suspended in connection with the incident.

MIM legislator from Aurangabad, Imtiaz Jaleel, said the guilty needs to be punished.

On the night of February 19, Yunus Shaikh, an assistant sub-inspector in Latur district, and his colleague K Awaskar allegedly stopped a group of local youths from erecting the flag in the "sensitive" area. The group included Marathas and other Hindus celebrating Shivaji Jayanti, police said.

Awaskar and Shaikh, both on duty at Pangaon police chowki, reached the spot and asked the youth to leave. They told them that erecting the flag could lead to communal clashes, a police official said.

At 9 am on Saturday, a mob of around 200-300 people from the village, including the youths, showed up at the police chowki.

"They (youths) had incited the mob by telling them that the two policemen had crushed their flags under their feet," the official said.

The mob then allegedly began to attack the duo with fists and lathis. The ASI and his colleague suffered head injuries, but Shaikh was hit worse and was hospitalised.

A video of the purported attack, which has gone viral, shows Shaikh being made to parade a street with the saffron flag by the mob.