"I am going to keep asking exactly the same questions I have been asking. I am going to put pressure on the government and I will continue to do my job," said the Congress leader.

Congress vice president Rahul Gandhi on Tuesday alleged a “political vendetta” by the ruling Bharatiya Janata Party into the National Herald case, and insisted that he will not be cowed down and will continue asking questions to put pressure on the National Democratic Alliance at the Centre.

Earlier, a combative Sonia Gandhi, invoking the legacy of her mother-in-law and former Prime Minister Indira Gandhi, had asserted that she was not scared of anyone.

“Well I absolutely see a political vendetta. This is the way the Central government functions, the way they think,” Rahul, who was in Cuddalore to distribute aid to flood-hit people, told reporters.

Rahul said the government at the Centre thought it could stop him from asking questions “about them” by adopting such “vendetta politics,” but “that is not going to happen.”

“I am going to keep asking exactly the same questions I have been asking. I am going to put pressure on the government and I will continue to do my job,” the Amethi MP said.

Delhi high court on Monday rejected the pleas of Rahul and Sonia for quashing the summons against them in the National Herald case.

However, on Tuesday, they were directed to appear in person on December 19 by a Delhi court which allowed their plea seeking exemption from personal appearance for the day in the National Herald case.

Later at Cuddalore, Gandhi was seen consoling a wailing old woman who had been affected by the floods.

The distraught old woman was seen getting emotional and hugging him, even as Gandhi consoled her while giving away aid material in the presence of Elangovan and other senior leaders of the party.

Congress to challenge summons to Sonia, Rahul in SC Caption this: What did Rahul show Sonia on his phone? 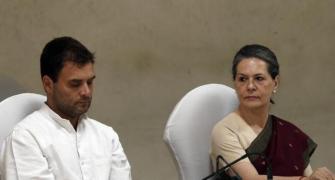