The border standoff between India and China in eastern Ladakh is expected to be resolved peacefully 'very shortly', the Indo-Tibetan Border Police (ITBP) chief S S Deswal has said, adding the infrastructure along the Line of Actual Control (LAC) is also being ramped up at a rapid pace. 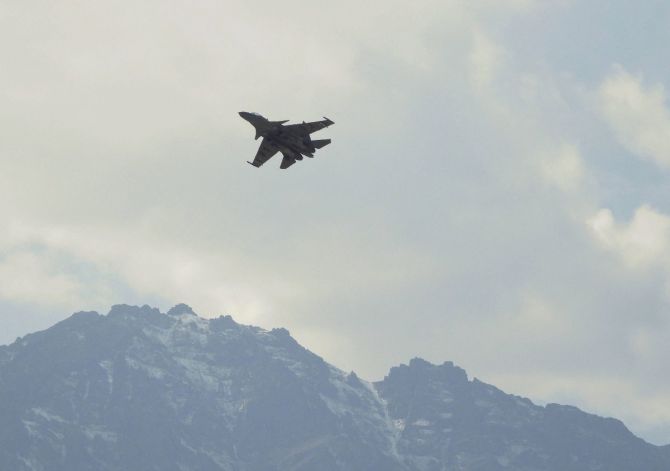 IMAGE: An Indian Air Force (IAF) fighter jet flies in the skies amid the prolonged India-China stand off in eastern Ladakh, in Leh, on Thursday. Photograph: PTI Photo

Talking to PTI during a wide-ranging interview, the director general of the ITBP said his troops have been provided with special winter clothing and nutritious food as they brave the severe chill in eastern Ladakh where the armies of India and China are locked in a tense standoff for over six months.

Asked about the current military standoff with China in eastern Ladakh, Deswal said 'strains in bilateral relations are already evident but we are confident these will be sorted out peacefully very shortly'.

Authoritative sources on Wednesday said India and China have broadly agreed on a three-step process on disengagement of troops and withdrawal of weaponry from all major friction points in a time-bound manner.

"Indo-Tibetan Border is the highest international border in the world. At every location it is about 10-11 thousand feet high. All our troops are deployed at that height.

"Oxygen is less, temperature in winters is very severe as it touches up to minus 40 degrees Celsius," he said.

"All these difficulties make the very existence of human beings in that area very difficult and then conducting patrolling on the border is equally tough."

The training and acclimatisation of ITBP jawans is long and we inculcate all kinds of skills and boost immunity so that they find it comfortable to survive in the harsh environment, he said.

Deswal said the force does special winter stocking every winter and this time the logistics exercise has been enhanced.

"For protection of our troops we have provided special cold clothing. We have upgraded the ration content with high nutrition and high calorie food to survive the cold.

"These are the working conditions on that border and being an un-demarcated border, a jawan has to be always alert," he added.

The protection of the border is undertaken by patrolling and the ITBP conducts long patrols that may extend up to 30 days, said Deswal, who leads the 90,000-strong mountain-warfare trained force.

The ITBP chief also spoke about his recent tour of the Ladakh front where he spent 8-9 days and decorated 291 of his personnel for showing gallantry during face-offs and skirmishes with Chinese troops in May and June.

"I may not visit them when things are in good position but it is my responsibility to reach them whenever they are in tough conditions," he said.

On beefing up border infrastructure, Deswal said the work to raise new border posts and to connect them with all-weather roads is progressing at a fast pace.

About 75 per cent of the ITBP border posts are now connected by roads, he added.

The ITBP, raised in the aftermath of the 1962 Chinese aggression, has about 180 posts all along the 3,488-km-long LAC that stretches from Ladakh to Arunachal Pradesh on India's eastern flank.

"There is a government focus for creation of good border infrastructure so that the local population as well as the forces are able to reach all remote parts of our own territory as close to the border as possible."

"The pace of construction of roads is very fast now. In the last few years, many roads have been constructed. Initially, when ITBP was raised the patrol party used to go on foot from Leh to Daulat Beg Oldi (DBO) and it used to take more than a month to reach there," Deswal said.

The distance between Leh and DBO is about 250 km.

From that stage today, he said, almost 75 per cent of the ITBP posts are now connected by roads on the entire border.

"With the same pace of road construction in the next 5-6 years, we hope that all our posts will be well connected by roads," he added.

The DG said the ITBP is also upgrading its communication infrastructure to the current level of technology and when it comes to an upgrade in weaponry the force is committed to prevailing bilateral protocols on this front.

Deswal also said the government has recently sanctioned 47 new border posts (BoPs) to the ITBP along the entire LAC and their effort is to establish several of them by 2021.

"Majority of these new border posts will come up in the state of Arunachal Pradesh. We have already identified the sites and the state government is willing to transfer the sites to us...it is in a very advanced stage and we are progressing every day," he said.

When asked if the ITBP has sought fresh battalions and manpower to man these posts, Deswal said that by the time we have the physical infrastructure on ground the force is expected to have additional manpower.

Neelabh Srivastava
© Copyright 2021 PTI. All rights reserved. Republication or redistribution of PTI content, including by framing or similar means, is expressly prohibited without the prior written consent.