It was revolt, not betrayal: Shinde responds to Uddhav's criticism

Maharashtra Chief Minister Eknath Shinde on Wednesday asserted his rebellion was not an act of "betrayal", but a "revolt" and asked Shiv Sena president Uddhav Thackeray to kneel down at party founder Bal Thackeray's memorial and apologise for going against his ideals and  aligning with the Congress and the Nationalist Congress Party (NCP). 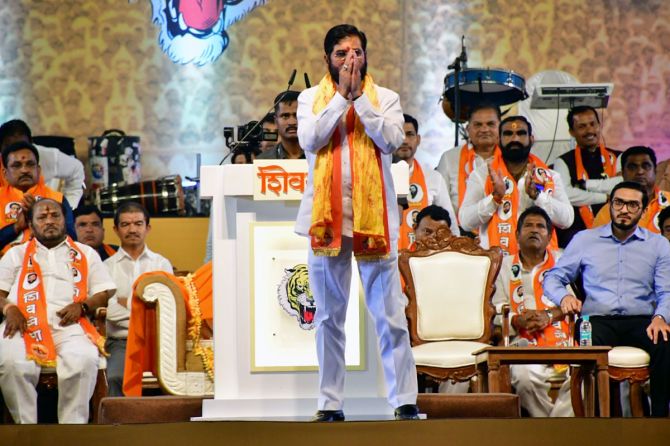 Addressing a mega rally at the Bandra Kurla Complex's MMRDA ground on the occasion of Dussehra, Shinde said voters in the state elected the Shiv Sena and the Bharatiya Janata Party in the 2019 assembly elections, but Thackeray "betrayed" the people by joining hands with the Congress and the NCP to form the Maha Vikas Aghadi (MVA) government.

We did not do gaddari (betrayal), but this (rebellion) was gadar (revolt). We are not gaddar (traitors), but soldiers of Balasaheb (Shiv Sena founder Bal Thackeray). You sold Balasaheb’s principles. Who are the real traitors who betrayed Hindutva for the sake of power?” Shinde said in a speech that lasted for over an hour and a half.

The Thackeray-led faction of the Shiv Sena has often targeted party rebels headed by Shinde as “traitors".

The chief minister stoutly defended his rebellion against Thackeray's leadership in June that brought down the Shiv Sena-led MVA government.

”We took this step (rebellion) to save the Shiv Sena, preserve the principles of Balasaheb, Hindutva and for the betterment of Maharashtra. And we took it publicly,” he said, adding that he has been getting an overwhelming response for the decision.

The CM asked Uddhav Thackeray to kneel down at Sena founder Bal Thackeray's memorial in Mumbai and apologise for going against his ideals and aligning with one-time political rivals Congress and the NCP.

”Do you (Uddhav Thackeray) even have the right to occupy the post (of Shiv Sena chief) after compromising on the principles of Bal Thackeray?” Shinde said in a scathing attack on his political rival.

He said massive crowds at his Dussehra rally was proof enough to show who are the true inheritors of Bal Thackeray's legacy.

Shinde said being the chief minister, he could have intervened to get the Shivaji Park ground for his camp to hold the Dusshera rally, but avoided doing so to maintain law and order.

”Even if you have got the (Shivaji Park) ground, we have the principles of Shiv Sena pramukh (the late Bal Thackeray),” he said.

The Thackeray-led faction had approached the Bombay high court last month to hold its rally at Shivaji Park after the Mumbai civic body denied it permission to use the iconic ground in Dadar for its Dussehra event.

Slamming Thackeray, Shinde, who heads the rebel faction of the party, said the Shiv Sena was not a private limited company and maintained the 56-year-old outfit was built through hard work of common Sena workers.

He said Thackeray never went beyond  ”hum do hamare do", a reference to his sons Aaditya and Tejas Thackeray. Shinde said while Uddhav Thackeray became the chief minister in November 2019, he made his son Aaditya a cabinet member, too.

The rally was attended by Jaidev Thackeray, brother of Uddhav Thackeray, and his estranged wife Smita Thackeray. Nihar Thackeray, grandson of the late Bal Thackeray and son of Bindumadhav, also attended the rally besides Champa Singh Thapa, a long-time personal aide of the Sena founder. 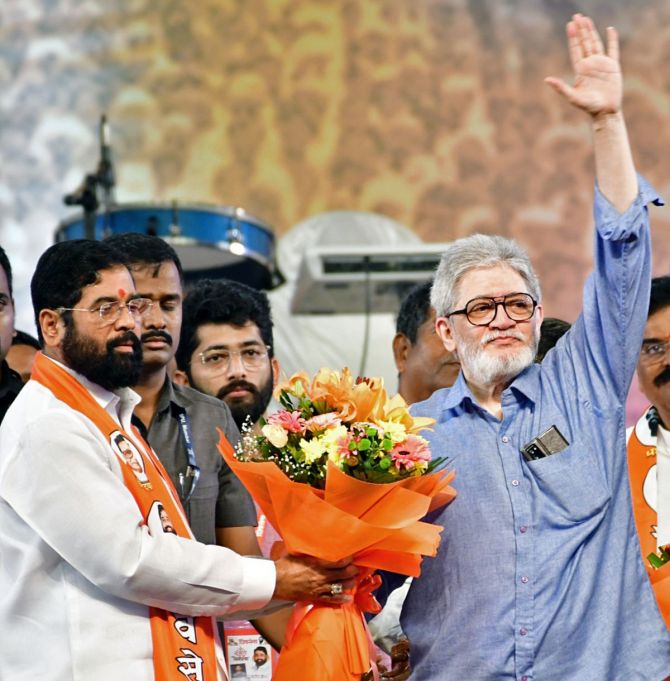 A vacant chair used by Bal Thackeray during his last rally in Thane was placed at the centre of the stage at the sprawling ground in BKC, located close to ‘Matoshree', the private residence of the Thackeray family in suburban Bandra.

Shinde asked why a decision of Shiv Sena MLAs tendering their resignation was not taken when the party chose to align with the Congress and the Sharad Pawar-led NCP in 2019.

He was responding to Aaditya Thackeray's challenge that rebel MLAs should resign and face re-election.

Hitting back at Uddhav Thackeray for calling him 'Katappa', a character from superhit film Baahubali portrayed as a betrayer in the movie, the chief minister said he was not someone who practised double standards.

Questioning Uddhav Thackeray's style of working, Shinde asked how many times he visited Mantralaya, the state secretariat in south Mumbai, when he was the chief minister (November 2019-June 2022).

Administrative work came to a virtual standstill in the two-and-a-half years of the MVA government led by Uddhav Thackeray, he claimed.

Shinde said while Uddhav Thackeray was working from home, he, on becoming chief minister on June 30, resorted to work without home.

Although the chief minister hailed from the Shiv Sena, it was the NCP which ran the show in the previous dispensation, Shinde said.

Shinde assured that the Maratha community, which has been demanding reservation in government jobs and education for long, will get justice.

He said in the next two years, there will be a 'development model' of Maharashtra.