News
Business
Movies
Sports
Cricket
Get Ahead
Money Tips
Shopping
Sign in  |  Create a Rediffmail account
Rediff.com  » News » It's a smear campaign against us: Kejriwal

Accusing senior leaders of having "unleashed a smear campaign against the civil society members", they appealed to the government to not divert attention from the core issue: a corruption free India.

"There seems to be a flurry of comments coming from senior leaders against the civil society members of the committee constituted to draft the Lok Pal bill. Because of comments from senior leaders such as Digvijay Singh, the news agencies are now concentrating on these allegations, instead of the bill," social activist Arvind Kejriwal, a member of the committee, told rediff.com.

"The issue here is being forgotten, which is corruption and a strong anti-corruption mechanism," he added.

Claiming that these are tactics of "some people with vested interest to discredit the members and derail the bill", former Law minister Shanti Bhushan said, adding that it shows the desperation of "these people."

"I have filed a complaint with the Delhi police, who have registered a case (of forgery for the purpose of harming reputation). It will be proven beyond all doubt that the CD is doctored if it is sent for a forensic examination. This is an organised campaign against us," he said.

When asked to comment on Digvijay Singh's comment that he was Aruna Roy's chela, Kejriwal said, "I am not anybody's chela. I have great respect for Aruna Roy. Anna Hazare is like my guru, but I am not his chela either. I make my own independent decisions."

Bhushan also reacted strongly to Singh's comment that Hazare should be careful in choosing the right people, as recently a court had issued notices against the lawyer for alleged undervaluing of their property and evasion of stamp duty.

"Digvijay Singh has not even bothered to read the application of stamp duty filed before the Collector of Allahabad. The fact is that we have an old house under our tenancy on three acres of land in Allahabad. In 1966, the landlord had agreed to sell the property to me for Rs 1 lakh in a written agreement, which became a subject for suit in the court, he said"

"The matter was eventually compromised, by which the landlord kept one-third of the land and sold us the rest for Rs 1 lakh. As is the law, I paid a stamp duty of Rs 33,360 on a rate-able value of the property at Rs 6,67,200," he added.

"I even put in an application to the stamp collector to determine the stamp duty. To suggest that there has been any undervaluation of the property is ridiculous," Bhushan told mediapersons.

"There have been allegations that we have been receiving funding from international players and some extremist organisations. We are declaring our assets just to disprove that. In our campaign so far, we have received a total donation amounting to Rs 82,87,668," said Kejriwal.

"We have issued receipts to all the donors and have maintained a record of their details. We issued receipts on account of Public Cause Research Foundation which is acting as secretariat for the campaign," Kejriwal told mediapersons.

After the briefing, Kejriwal told rediff.com, "We will also try and put up the expenditure of the campaign on our website every 10 days. We want to maintain transparency in our campaign. If any of the leaders have any complaints against any of the members of the civil society, we say let there be an enquiry, he said."

Talking of the first joint drafting committee meeting on Saturday, Kejriwal said that they would put their draft of the bill in front of the committee and request the government to come up with clause by clause objection so that discussion can continue from there in the next meeting.

"For transparency, we will also request that the proceedings be video recorded. We will explain the need for this and see what they have to say. The third issue we are planning to pick up on Saturday is that the public be involved in the drafting of the bill," he said.

"This bill is for them and thus should have their suggestions. If the government puts up the bill on their website, well and good. But if they don't, we will, so that the public can comment and be involved in the drafting," Kejriwal said.
Sahim Salim in New Delhi
Related News: Arvind Kejriwal, Shanti Bhushan, Amar Singh, Mulayam Singh, Aruna Roy
Print this article
Pranab against Hazare's demand for Lok Pal panel

FAQ: What is Lok Pal Bill? Why the ruckus over it?
No change in nominees in Lokpal panel: Hazare 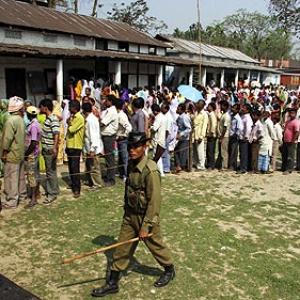