A court in New Delhi on Thursday said the mobile data which has been collected from several accused in the Delhi riots conspiracy case cannot be provided to the co-accused as it allegedly contains pornographic material and would hamper their privacy. In the hearing conducted through video conferencing, Additional Sessions Judge Amitabh Rawat orally made the remarks in response to the applications under Section 207 of the Code Of Criminal Procedure (CrPC) filed by the accused, which said that they are supplied with a copy of all the evidence and material relied upon by the prosecution in the charge sheet.

During the proceedings, the judge noted, 'There have been few applications where the prosecution has made their reservations over certain personal data of other co-accused persons being made available to the applicant.'

He further that the prosecution showed him certain photographs and details which is a sample of what is contained in the mobile phones of the accused persons.

'From the look of those photographs and videos, it cannot be made available to anyone,' the judge said.

He added, 'I am told that there are certain audio and video of accused persons which cannot be supplied. Perhaps it appears even to their counsels because it is pornographic material and video of self.'

He, however, clarified that not everything is pornographic, there are some personal photographs of the accused persons as well.

The judge directed the counsels of the accused, 'Whenever you move an application [under 207 CrPC], give an advance copy to the prosecution so that they can file a reply to it, or supply all the documents, except those particular documents or videos on which they have expressed their reservation of being self-pornographic or some personal photograph.'

Earlier, Special Public Prosecutor Amit Prasad had told the court that supplying all data without any classification would infringe on the privacy of the others.

Eighteen accused in this case have been booked under stringent anti-terror law UAPA and are accused of being the "masterminds" of the February 2020 riots, which had left 53 people dead and over 700 injured. 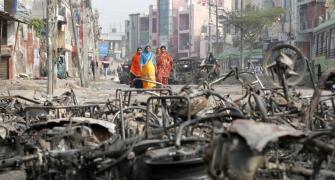