Blasting off from the Ariane Launch Complex in Kourou, a French territory located in northeastern coast of South America at 2:35 a.m IST, the European launch provider Arianespace's Ariane 5 injected the 'high power' spacecraft into the orbit in a flawless flight lasting about 38 minutes and 25 seconds.

'India's communication satellite #GSAT30 was successfully launched into a Geosynchronous Transfer Orbit by #Ariane5 #VA251. Thanks for your support !!!' the Indian Space Research Organisation tweeted soon after deploying the satellite into the transfer orbit.

Confirming the successful launch, Arianespace CEO Stphane Isral too tweeted, 'A strong start to 2020 as #Ariane5 successfully deploys its two satellite passengers EUTELSAT KONNECT and GSAT-30 into geostationary transfer orbit! I appreciate the trust from the two customers on this mission: @Eutelsat_SA and @ISRO #VA251 #MissiontoSuccess.'

GSAT-30 is the first satellite launch for ISRO in 2020, during which the space agency has planned about 25 missions. 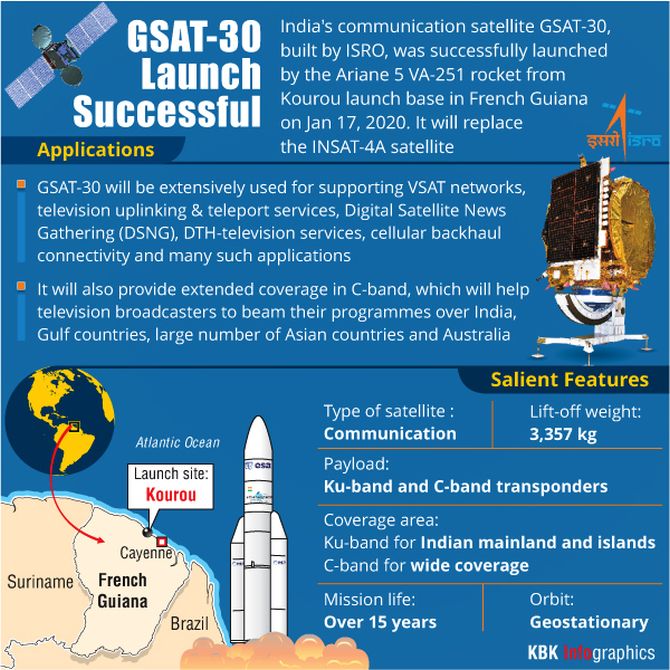 ISRO's U R Rao Satellite Centre Director P Kunhikrishnan, who was present in Kourou, congratulated the ISRO community and Arianespace team on the successful launch.

Calling it an 'excellent start' to 2020 for ISRO with the launch, he said, "The mission team at the master control facility have already acquired the satellite and they will
immediately complete the post launch operations..."

ISRO's Master Control Facility (MCF) at Hassan in Karnataka took over the command and control of GSAT-30 immediately after its separation from the launch vehicle and preliminary health checks of the satellite revealed its normal health, the space agency said in a statement later in the day.

In the days ahead, orbit-raising manoeuvres will be performed to place the satellite in Geostationary Orbit (36,000 km above the equator) by using its on board propulsion system.

During the final stages of its orbit raising operations, the two solar arrays and the antenna reflectors of GSAT-30 will be deployed, ISRO said adding following this, the
satellite will be put in its final orbital configuration.

The satellite will be operational after the successful completion of all in-orbit tests.

The 3,357-kg satellite, which was deployed from the lower passenger position of Ariane-5 launch vehicle (VA 251) into to geostationary transfer orbit (GTO), is configured on ISRO's enhanced I-3K Bus structure to provide communication services from geostationary orbit in C and Ku bands.

The satellite derives its heritage from ISRO's earlier INSAT/GSAT satellite series, and is equipped with 12 C and 12 Ku band transponders.

GSAT-30 is to serve as replacement to the 'ageing' INSAT-4A spacecraft services with enhanced coverage, the ISRO has said.

'GSAT-30 has a unique configuration of providing flexible frequency segments and flexible coverage. The satellite will provide communication services to Indian mainland and islands through Ku-band and wide coverage covering Gulf countries, a large number of Asian countries and Australia through C-band,' ISRO Chairman Dr K Sivan was quoted as saying in the ISRO release.

With a mission life of 15 years, GSAT-30 is an operational communication satellite for DTH, television uplink and VSAT services.

The Bengaluru-headquartered ISRO has said the communication payload of GSAT-30 is specifically designed and optimised to maximise the number of transponders on the spacecraft bus.

Vice President M Venkaiah Naidu is among the prominant personalities who have congratulated ISRO for the successful launch.

'Congratulations to ISRO for the successful launch of India's latest telecommunication satellite #GSAT30 into a Geosynchronous Transfer Orbit (GTO) from Kourou launch base, French Guiana. @isro,' the VP's office tweeted.

For its initial flight of 2020, Arianespace orbited EUTELSAT KONNECT, a telecommunication satellite for the operator Eutelsat, along with GSAT-30, using an Ariane 5
launch vehicle from the Guiana Space Centre.

EUTELSAT KONNECT which was produced by Thales Alenia Space for Eutelsat was riding in the upper position of Ariane 5's payload arrangement, and was released first in the flight sequence at 27 minutes following liftoff.

Since the launch of India's APPLE experimental satellite on Ariane Flight L03 in 1981, Arianespace has orbited 24 satellites, including GSAT-30, for the Indian space agency.