Around 600 scientists and engineers are hoping for the best as they forge ahead with plans of making an indigenous version of a space shuttle. 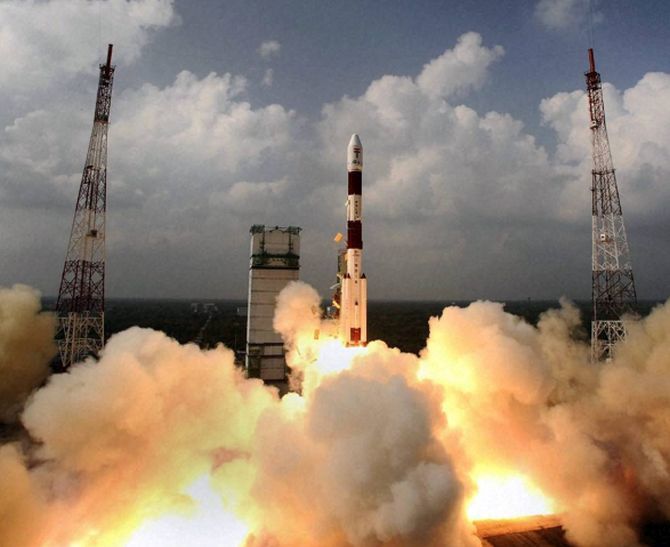 For the very first time in its history, the Indian Space Research Organisation is actually growing wings as it embarks this month on a never before space flight that would make history.

The Indian space agency is all set to undertake the maiden launch of its very own indigenously version of a ‘space shuttle’, a fully made-in-India effort. On Sunday, a sleek winged body almost the weight and size of a sports utility vehicle is being given final touches at Sriharikota awaiting the final countdown.

Yes, the big powers abandoned the idea of a winged reusable launch vehicle but India’s frugal engineers believe the solution to reducing cost of launching satellites into orbit is to recycle the rocket or make it reusable. Scientists at ISRO believe that they could reduce the cost of launching stuff into space by as much as 10 times if reusable technology succeeds, bringing it down to $ 2,000 per kg.

Very soon and if all goes well possibly before the monsoon sets in, India’s space port at Sriharikota on the coast of the Bay of Bengal in Andhra Pradesh will witness the

launch of the indigenously made Reusable Launch Vehicle -Technology Demonstrator. This will be the first time ISRO will launch a space craft, which actually has delta wings and after launch it will be glided back onto a virtual runway in the Bay of Bengal.

The RLV-TD is unlikely to be recovered from the sea during this experiment as it is expected that the vehicle will disintegrate on impact with water since it is not designed to float. The purpose of the experiment is not to see it float but to glide and navigate from a velocity five times higher than the speed of sound onto a designated virtual runway in the Bay of Bengal some 500 km from the coast.

Very similar in its looks to the American space shuttle, the RLV-TD being experimented is a scale model which is almost six times smaller than the final version.

K Sivan, director of the Vikram Sarabhai Space Centre, Thiruvananthapuram, says, “These are just the first baby steps towards the big Hanuman leap.”

The final version will take at least 10-15 years to get ready since designing a human rated reusable rocket is no child’s play.

The only countries that have attempted operational flights of a space shuttle are America, which flew its space shuttle 135 times and then retired it in 2011 and since then it lost its capacity to send astronauts in space on American made rockets. The Russians made only a single space shuttle and called it Buran it flew into space just once in 1989.

After that the French and Japanese have made some experimental flights and from available literature it seems the Chinese have never attempted a space shuttle.

India embarked on making its own version of the space shuttle by thinking about it more than 15 years ago, but work in earnest it seems started only five years ago when a dedicated team of engineers and scientists plunged into making RLV-TD a reality.

The 6.5-m-long ‘aeroplane’-like spacecraft will weigh 1.75 tonne and will be hoisted into the atmosphere on a special rocket booster.

The special booster or the first stage is powered using a solid fuel and it will hoist the RLV-TD experiment to about 70 kilometre into the atmosphere from where the descent will begin.

During the descent, phase which is essentially a glider like event small thrusters will help the vehicle to be navigated on to the exact spot where it is supposed to land.

Ships, satellites and radars will monitor its descent. The current experimental version has no undercarriage so it cannot be brought back onto land and India lacks a runway that is longer than 5 kilometre in length to accommodate such a landing.

Some private billionaires with very active support from NASA have been trying to master vertical lift-off and vertical landing as part of trying to recycle rocket engines.

SpaceX is a company owned by South Africa-born billionaire Elon Musk which became big through the Internet economy and has been able to land its Falcon-9 rocket onto a sea-based platform.

On the same lines, the company Blue Origin owned by Jeff Bezos landed its New Shepard rocket on land in Texas. Bezos, another billionaire, made it big by building the Amazon online trading platform.

In fact, NASA chief General Charles Bolden, when he was in New Delhi recently, said the competition has shifted to a fight among billionaires to reduce the cost of launching satellites into space.

The making of the Indian space shuttle or RLV-TD has taken five years and the government has invested Rs 95 crore in the project. This flight will test the capability of the vehicle to survive a re-entry at speeds higher than that of sound so it is called a hyper sonic experiment. Later, in the next few flights the RLV will be subjected to a landing experiment and another return flight experiment.

Once these are successful, ISRO will then decide on what should be the final configuration of the Reusable Launch Vehicle.

One key technology the scientists at VSSC had to develop was to make materials that can withstand the very, very high temperatures that the exterior of the vehicle is faced with as it comes back into the dense atmosphere after its journey through near vacuum in space.

The friction from the air turns the exterior like a red-hot iron plate. To be able to withstand these 5000-7000 degree Celsius temperature the scientists have developed very lightweight heat resistant silica tiles that are plastered on the underbelly of the so-called Indian space plane.

The nose cone takes the brunt of the high temperatures and is made up of a special carbon-carbon composite that can withstand high temperature. These special materials are necessary to protect the insides of the vehicle where the temperature should never go higher than 50 degree Celsius.

In fact, it is these heat resistant tiles and thermal coating that failed on the American Space Shuttle, Columbia that resulted in the death of Indian born American astronaut Kalpana Chawla’s in 2003. Consequently, ISRO has laid a lot of emphasis on the thermal management of the RLV.

After the successful deployment of the swadeshi Global Positioning System through NAVIC or Navigation with Indian Constellation, ISRO is again reaching for the stars.

Technology development is tough and space fairing is certainly not for the faint hearted and the 600 scientists and engineers who have toiled hard in making the RLV-TD a reality will be watching with baited breath if their baby succeeds.

Shyam Mohan, the project director from VSSC for this landmark experiment, says his team has spent sleepless nights in perfecting this new rocket but adds that space technologies are inherently risky.

So will ISRO succeed where other super powers have failed, Indians certainly hope for the best, as success has become a habit at ISRO.

May be sooner than later the RLV should be named the ‘Kalamyaan’ after India’s legendary former President APJ Abdul Kalam, an aeronautics engineer par excellence who made top class rockets and dreamt big of India being propelled to become a developed country.

For ISRO, no dream is too big as it carefully forges ahead to have a fully ‘swadeshi space shuttle’.