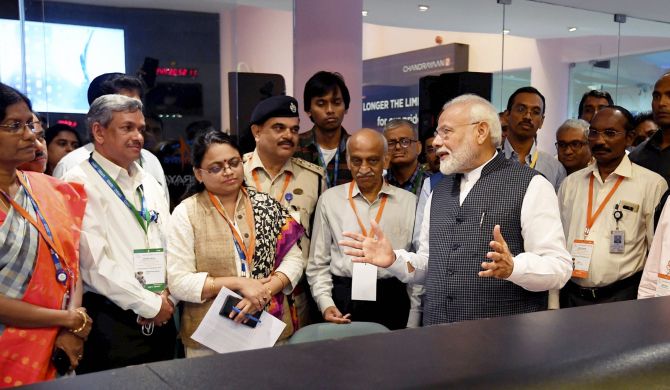 Prime Minister Narendra Modi on Saturday said the Indian Space Research Organisation scientists will be undeterred by the setback on the Chandrayaan-2 mission, and asserted the nation will achieve its goal of reaching the Moon.

Modi was speaking hours after the Vikram lander of the Chandrayaan-2 mission lost communication contact with the ground centre in the wee hours of Saturday in Bengaluru, a moment he personally witnessed.

He said the ISRO scientists have a very strong spirit of working and will not rest till the objective is met.

"The dream of reaching the moon will be accomplished ISRO and those working with it won't stop, get tired or sit down," Modi said, speaking at an event in the financial capital later in the day.

Modi said the scientists are not the naysayers who shy away from challenges or chicken out at the first sight of difficulty. They pursue their goals hard and keep trying till the objective is met. 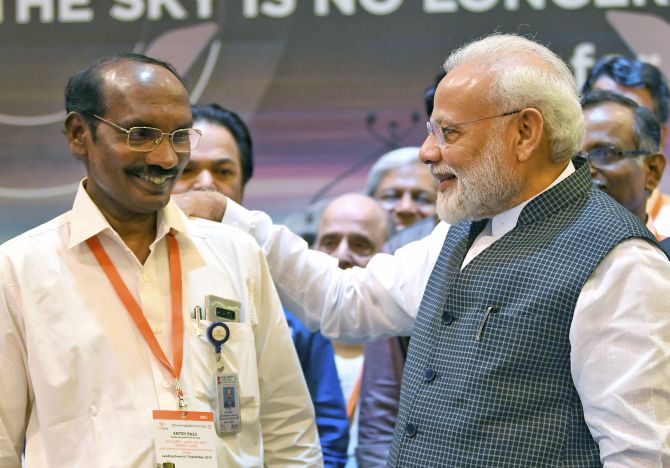 The prime minister said the orbiter is still hovering the moon and termed it as a historic achievement in itself.

Addressing a public gathering here, he invoked the famous 'Mumbai Spirit' that helps the megapolis face any setbacks, and said the Isro scientists have a similar spirit.

Earlier in the day, Modi had addressed scientists at the ISRO control centre in Bengaluru, and told them not to get disheartened by the hurdles in the moon mission and asserted that there will be a 'new dawn and a better tomorrow'.

"We came very close but we need to cover more ground in the times to come. Learnings from today will make us stronger and better. The nation is proud of our space
programme and our scientists. The best is yet to come in our space programme. There are new frontiers to discover and new places to go. The whole nation is with you," Modi told the crestfallen scientists. 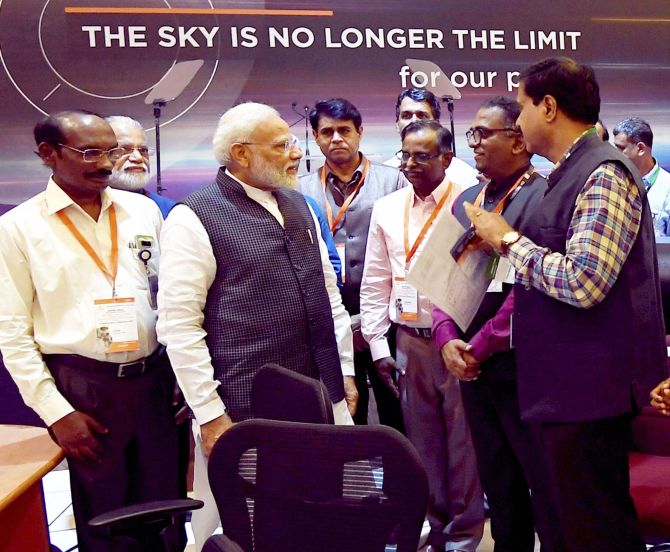 ISRO's plan to soft-land the Vikram module on the south pole of the lunar surface-the first nation ever to make such an attempt--did not go as per script in the early hours of Saturday, with the lander losing communication with ground stations during its final descent.

Modi delivered a message of optimism, solidarity and hope to the scientists in an address, which was broadcast live, hours after the Isro announced that it had lost communication with the lander.

IMAGES: Prime Minister Narendra Modi interacts with ISRO scientists after connection with the Vikram lander was lost during soft landing of Chandrayaan-2 on lunar surface, in Bengaluru, on Saturday. Photographs: Press Information Bureau of India
© Copyright 2020 PTI. All rights reserved. Republication or redistribution of PTI content, including by framing or similar means, is expressly prohibited without the prior written consent.