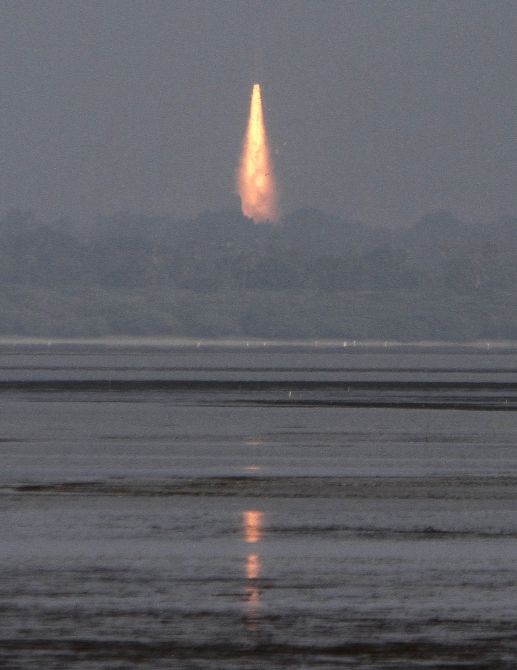 Enthused over its successful launch of GSLV D5 with GSAT-14 communication satellite from Satish Dhawan Space Centre in Sriharikota on Sunday, the Indian Space Research Organisation is planning a series of GSLV launches and an experimental launch of the advanced version GSLV Mark III soon from the spaceport.

"We are going for a series of GSLVs after this successful launch. GSAT 6, GSAT 7, GSAT 9, GISAT 7, Chandrayaan 2 and two more communication satellites. In the end of 2014 or in early 2015, we will have the next GSLV launch," ISRO chairman K Radhakrishnan told reporters.

With Sunday’s launch, the ISRO is confident of launching satellites weighing up to 2.2 tonnes, he said, adding that the satellites from India weighing above the mark would have to be launched through other space agencies abroad.

The ISRO was also busy conducting a series of tests in developing the Mark III version of GSLV at Liquid Propulsion Systems Centre at Mahendragiri in Tamil Nadu, he said. "We would also have an experimental launch of GSLV Mark III soon to understand the behaviour of the vehicle in flight," the chairman said.

An ISRO team is examining the possibility of setting up a launch site at Kulasekarapattinam in south Tamil Nadu, he said, replying to a query. Another team headed by Prof Badri Narayanamurthy is studying the third launch pad at Sriharikota, since launch vehicles like GSLV Mark III can be launched only from the second launch pad, unlike PSLVs and GSLVs, he said.

“We are also working on unified launch vehicle with booster stage series cryogenic engine," Radhakrishnan said.            The year 2014-15 would also see launch of navigational satellites IRNSS-IB, IRNSS-1C, IRNSS-1D, IRNSS-1E on board PSLVs. "By March 2015, we would have five of the total seven satellites on orbit. We can start using benefits of IRNSS with four satellites on orbit, but all seven would give a better coverage," he said.

He said ISRO's Mars Orbiter mission was travelling 9.5 million km from Earth in normal health and was on schedule to reach Mars' orbit in September this year. The ISRO is also in the "initial stages" of talks with the International Space Station to conduct scientific experiments with specific focus on climate related areas, Radhakrishnan said.

"India is not a partner for now in the International Space Station. We are in the initial stages of discussion on whether we could do something on climate-related earth observation system experiments. Initial discussions are on," he told media persons.The ISS has invited other countries to conduct experiments in its laboratory. The U.S.A., Russian, Japan, Canada and Europe are the present members of the ISS.