Indian Space Research Organisation on Wednesday successfully injected into orbit its earth imaging and mapping satellite CARTOSAT-3 along with 13 commercial nano-satellites from the United States. 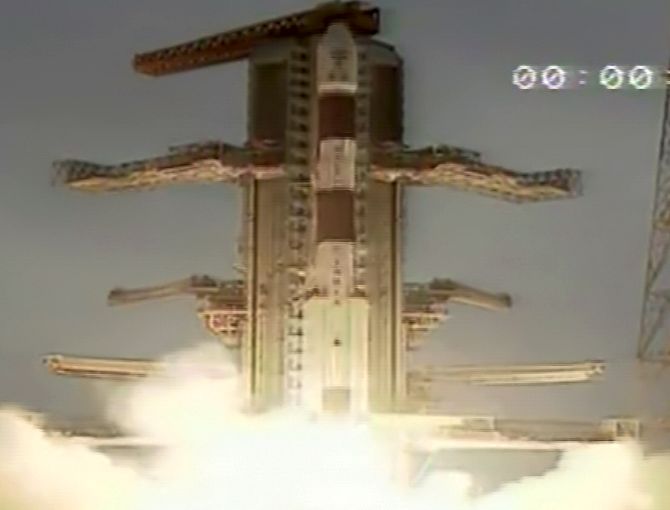 With cloudy skies in the back ground, the 44.4 metre tall PSLV C47 rocket lifted off majestically at 9.28 am from the second launch pad at the Sriharikota spaceport.

CARTOSAT-3, India's most complex and advanced earth imaging satellite built so far, was placed into orbit 17 minutes and 46 seconds after lift-off, the immediate mission after Chandrayaan 2, where the lander crashed while making a soft descent on the lunar surface on September 7.

All the 13 nano-satellites from the United States were released into the orbit at 26 minutes and 56 seconds after liftoff, ISRO said.

ISRO Chairman K Sivan and other scientists broke into cheers as the earth imaging and mapping satellite was injected precisely into the desired orbit.

Later, speaking from the Mission Control Centre, Sivan said, "I am extremely happy to declare that PSLV-C47 precisely injected CARTOSAT-3 and 13 customer satellites successfully in the desired orbit of 509 kms."

"CARTOSAT-3 is India's highest resolution civilian satellite, and the most complex and advanced earth obvservation satellite ISRO has built so far," he said.

WATCH: It's a liftoff!

He congratulated the teams behind both the satellite as well as the launch vehicle, besides various review teams and industry partners involved in the mission.

On future missions, the ISRO chief said, "Our hands are full," with 13 missions slated upto March 2020.

"They combine some six launch vehicle missions and seven satellite missions," he said.

Team ISRO will rise to the occasion and meet challenges and make every mission a grand success, a beaming Sivan said as relief was writ large on his face since the earlier mission -- Chandrayaan-2 -- did not yield the desired results.

It will also serve military purposes.

PSLV-C47 is the 21st flight of PSLV in 'XL' configuration (with 6 solid strap-on motors).

The 13 commercial nano-satellites from the US are being carried as part of commercial arrangement with NewSpace India Limited of the Department of Space.

Among the 13 commercial nano-satellites are FLOCK-4P, 12 in numbers, with mission objective of earth observation, and one satellite named MESHBED, whose objective is communication test bed.

ISRO has said this would be the 74th launch vehicle mission from the Satish Dhawan Space Centre, Sriharikota. The PSLV is in its 49th mission while PSLV-XL variant on its 21st mission.

CASRTOSAT-3 is the ninth in the Cartosat series and Wednesday’s launch is the fifth for ISRO in 2019.