Scripting success on the maiden operational flight of its heavy-duty rocket fitted with the indigenous cryogenic upper stage, India on Thursday launched its advanced weather satellite INSAT-3DR onboard GSLV-F05 from the spaceport in Sriharikota. 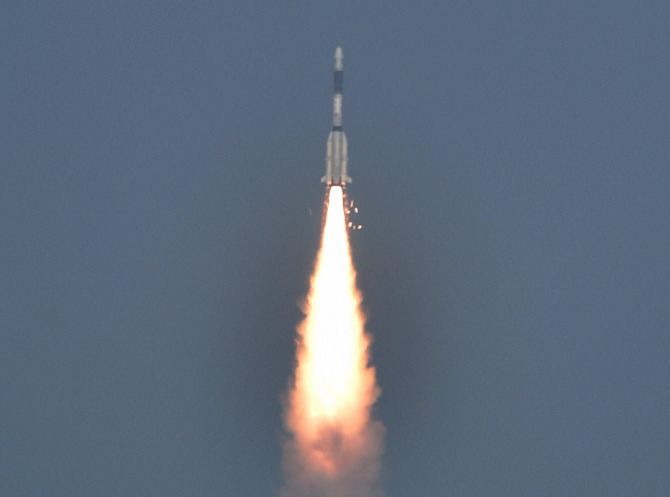 IMAGE: INSAT-3DR was aboard the GSLV-F05 which was in its 10th flight. Photograph: PTI

The 49.13-metre tall rocket lifted off from the second launch pad at the Satish Dhawan Space Centre here at 4.50 pm, majestically soared into the skies and injected the 2,211-kg INSAT-3DR into a Geosynchronous Transfer Orbit about 17 minutes later.

Earlier, it was scheduled to lift off by 4.10 pm but due to "delay in cryostage filling operations" it was rescheduled to 4.50 pm, officials said.

INSAT-3DR, with a designed mission life of ten years, will provide service continuity to earlier meteorological missions and further augment the capability to provide various meteorological, search and rescue services.

Thursday's mission, the 10th flight of GSLV, assumes significance for the Indian Space Research Organisation as it is the first operational flight of the rocket fitted with the indigenous cryogenic upper stage.

GSLV-F05 also marked a hat-trick of success for the indigenously developed complex cryogenic upper stage after GSLV-D5 (January 2014) and D6 (August 2015) missions, which had launched GSAT-14 and GSAT-6 satellites into precise orbit.

The 2014 success had propelled India into the elite group of countries boasting of the homegrown complex cryogenic engine and stage after twin failures in 2010.

A jubilant ISRO Chairman A S Kiran Kumar patted his team of scientists for "another achievement" even as he said the satellite was placed in the orbit.

"Hearty congratulations to the entire ISRO team for the wonderful job you have done. Keep it up," Kiran Kumar said.

It was the seventh successful mission this year including the IRNSS series and the scramjet propulsion mission and it had been conducted with "utmost professionalism in the short period possible," Kunhikrishnan said.

After the INSAT-3DR is placed in orbit, scientists at Master Control Facility at Hassan, Karnataka would perform the initial orbit raising manoeuvres and later place it in circular geostationary orbit.

"This process may take place a few days after launch," the ISRO official said.

INSAT-3DR would supplement the services of INSAT-3D launched from French Guiana on July 26, 2013.

The payloads in INSAT-3DR are Imager, Sounder, Data-Relay Transponder and Satellite Aided Search and Rescue Transponder.

It is an improved version of similar imager that was used on INSAT-3A and Kalpana-1 Satellites.

The ‘sounder' payload, which was earlier used in INSAT-3D, will provide information on temperature and humidity.

The Data-Relay Transponder would be used for receiving meteorological, hydrological and oceanographic data.

The Satellite Aided Search and Rescue Transponder would pick up and relay alert signals originating from distress beacons of maritime, aviation, among others.