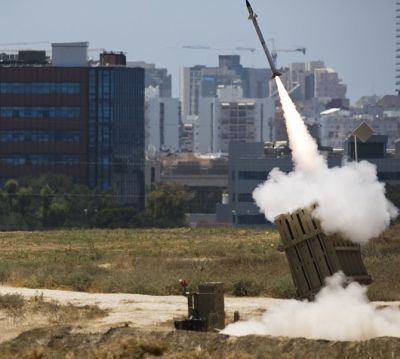 Israel on Tuesday resumed air strikes on Gaza after an Egyptian-brokered ceasefire failed to stop the escalating violence that has killed 192 Palestinians in nine days of fighting as Hamas continued to fire rockets at the Jewish state.

“Hamas has fired 47 rockets since we suspended our strikes in Gaza (this morning). As a result, we have resumed our operation against Hamas,” an Israeli military statement said on Twitter.

"After Hamas and Islamic Jihad refused the Egyptian proposal for a ceasefire and fired dozens of rockets at Israel, the prime minister and defence minister have ordered the IDF to act forcefully against the terror targets in Gaza," an Israeli official said speaking as Israeli strikes resumed.

"The prime minister and the defence minister have ordered the Israeli armed forces to take powerful action against terrorist targets in Gaza," he said.

There were no immediate reports of deaths or injuries.

The Egyptian-proposed ceasefire plan was aimed at halting Israel's deadly nine-day offensive on the Gaza Strip that has killed 192 Palestinians but the Israeli premier had warned that the operation would be intensified if Hamas militants refused to accept the truce.

But the Palestinian militant group rejected the ceasefire proposal calling it "surrender".

Despite Hamas' rejection of the ceasefire plan, which came into effect at 9 am local time, there were several hours of a lull in violence since morning.

"If Hamas doesn't accept the ceasefire proposal -- and that's how it seems at this point in time -- Israel will have all the international legitimacy to broaden its military activity (in Gaza) in order to achieve the necessary quiet," Israeli Prime Minister Benjamin Netanyahu said earlier.

He said Israel wanted "the demilitarisation" of Gaza and would respond "with force" to any further rocket fire.

Israel's security cabinet and the coalition partners in Netanyahu's government, however, were divided on the decision to accept the ceasefire proposal with vociferous opposition raised by some key leaders.

The proposed Egyptian ceasefire plan had called for a stop to Israel's aerial and naval attacks on Gaza, specifically refraining from any ground incursion into the Strip.

Hamas was expected to rein in the Palestinian factions and work to put an end to all types of attacks on Israel, including by rockets, sea or even underground tunnels.

So far, no Israelis have been killed in the fighting.

"If the offer is what was reported, then it is surrender. We'll intensity our fight against the enemy," Hamas' armed wing, Izz ad-Din al-Qassam Brigades, said in a statement.

"A ceasefire without an agreement is out of the question. During a war, you don't hold your fire and only then start negotiating," he said.

Hamas political bureau member, Ezzat Rishq, was quoted in local media as saying that the Egyptian initiative was not discussed with Hamas, Islamic Jihad or one of the other factions in the Gaza Strip.

Meanwhile, the death toll from Israel's military campaign in Gaza rose to 192, after six more Palestinians died, four of them in strikes before Israel accepted the ceasefire.

More than 1,300 including women and children, have been wounded since the offensive started on July 7, according to Palestinian health authorities.

US Secretary of State John Kerry had urged Hamas to accept Egypt's ceasefire proposal to halt the fighting.

In a statement by the State Department today, Kerry welcomed Israel's decision to accept the proposal.

"The Egyptian proposal for a ceasefire and negotiations provides an opportunity to end the violence and restore calm. We welcome the Israeli cabinet's decision to accept it. We urge all other parties to accept the proposal," Kerry said.

"We did not receive this declared paper from the Egyptians... which means it's an initiative for the media. It's not a political initiative," he told CNN.

The initiative was meant to "push the Palestinians into a corner and aid the Israelis," Hamdan asserted.

Some members within Netanyahu's ruling Likud party had also slammed the ceasefire offer as "capitulation".

Deputy Security Minister Danny Danon voiced disapproval of the Egyptian brokered ceasefire proposal saying, "a ceasefire is a slap in the face for the Israeli people."

Another Likud parliamentarian, Miri Regev, also opposed reports on the deal, saying, "I call on the prime minister not to agree to a ceasefire and to make a military decision that will weaken Hamas through action in the air, land and sea."

Many analysts believe that Netanyahu's position has been weakened politically over these differences.

Israel has massed thousands of troops on the border with Gaza amid warnings it is prepared to launch a ground invasion.

About 17,000 people from the Beit Lahiya area in the northern Gaza Strip streamed for protection into UN-run facilities after Israel warned residents to leave their homes.

Despite the concentrated attack, Palestinian militants continued to fire rockets at a broad swath of Israel.

The Israeli military on Monday said it shot down a drone spotted along the Israeli coastline, near the city of Ashdod.

Hamas' military wing said that it has sent a number of drones on missions inside Israel and would provide more details in due course.

While the Israeli attacks have killed some militants, around 70 per cent of the fatalities were civilians and the dead include over 30 children, the UN said.