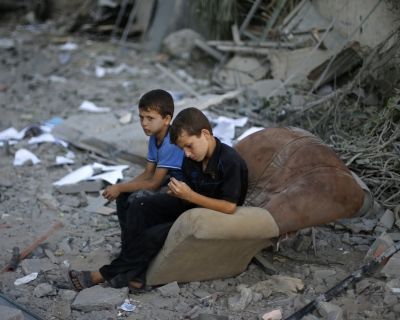 Israel on Saturday carried out fresh attacks on southern Gaza Strip amid a hunt for one of its missing soldiers believed to be captured by Hamas, as the new wave of violence has raised the Palestinians toll to 1,650.

At least 50 people were killed overnight in Israeli strikes, most of them in Rafah, raising the Palestinians death toll to 1650, mostly civilians, Gaza health officials said. They said 8,900 Palestinians have been injured so far.

Massive Israeli artillery shelling on Friday killed 160 Palestinians across the Hamas-ruled Gaza Strip following the collapse of a 72-hour truce just two hours after it began. Israel blamed Hamas for the breakdown of the ceasefire, accusing the Palestinian militant group of killing two Israeli soldiers and capturing another in Rafah area in southern Gaza Strip after the start of the truce.

Hamas, which rules the narrow coastal strip, on Saturday claimed responsibility for the incident but said it was carried out before the start of the ceasefire and it had not violated a United States- and United Nations-sponsored humanitarian truce.

Its armed wing -- Ezzedine al-Qassam Brigades -- said it had no information on the whereabouts of captured soldier and he might have been killed in massive Israeli shelling. Meanwhile, several rockets were fired into Israel on Saturday. An Israeli army spokeswoman said 51 rockets and mortar rounds hit Israel on Friday, with another nine rockets shot down by the Iron Dome missile defence system

So far, 63 Israeli soldiers, including two Indian-origin, have been killed in the conflict. Nearly 400 soldiers have been injured. Three Israeli civilians and a Thai national also died in rocket and mortar attacks. Israeli forces shot dead two Palestinians during separate clashes in the northern and central West Bank on Friday.

The Palestinian toll in the ongoing Israeli assault on Gaza has surpassed that of Operation Cast Lead in 2008-2009 as the conflict entered its 26th day on Saturday. Meanwhile, US President Barack Obama asked Hamas to show it is serious about wanting a ceasefire and demanded the release of the captured Israeli soldier.

"I think it's going to be very hard to put a ceasefire back together again if Israelis and the international community can't feel confident that Hamas can follow through on a ceasefire commitment," Obama told reporters on Friday.

The US also blamed Hamas for the breakdown of the truce, saying the "barbaric" attack by the Palestinian militant group was an "outrageous violation" of the ceasefire. Meanwhile, Egypt has decided to open the Rafah border crossing exceptionally to receive injured Palestinians.

The border was shut on Friday after a series of airstrikes hit Gaza near the Rafah border.

Image: Palestinian boys sit on a sofa outside their house, which witnesses said was damaged in an Israeli air strike, in Gaza City. Photograph: Suhaib Salem/Reuters

Harinder Mishra in Gaza/Jerusalem
© Copyright 2021 PTI. All rights reserved. Republication or redistribution of PTI content, including by framing or similar means, is expressly prohibited without the prior written consent.