Israeli Defence Minister Naftali Bennett has said that scientists at the country's main biological research institute have made a "significant breakthrough" in developing an antibody to the novel coronavirus, as the researchers wrapped up the development phase and moved to patent and mass produce the potential treatment. 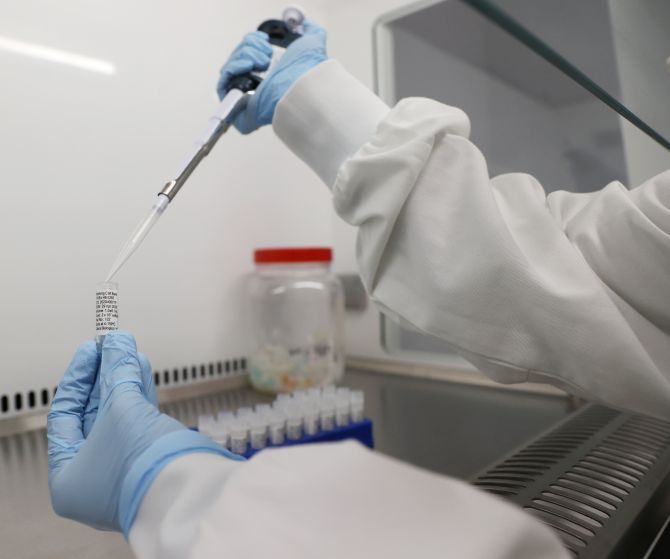 Bennett visited the labs of the Israel's Institute for Biological Research, supervised by the Prime Minister's Office and mandated to develop a vaccine for coronavirus, in Ness Ziona on Monday and was shown the 'antibody that attacks the virus in a monoclonal way and can neutralise it within the bodies of those ill', a statement from his office said.

The statement said that the antibody's development had been completed and that the institute was in the process of patenting the find 'and in the next stage, researchers will approach international companies to produce the antibody on a commercial scale'.

"I am proud of the institute staff for this terrific breakthrough," Bennett said, adding that "their creativity and the Jewish mind brought about this amazing achievement".

In March, Israeli daily Ha'aretz, quoting medical sources, had reported that scientists at the institute had made a significant breakthrough in understanding the biological mechanism and qualities of the virus, including better diagnostic capability, production of antibodies for those who already have the virus and development of a vaccine.

It was not immediately clear if the breakthrough presented to Bennett was in addition to progress that was reported in late March, and no further details were provided.

The statement also did not specify whether human trials were conducted.

Apparently, the IIBR conducted some clinical trials, it has been learnt.

The researchers have identified the protein that is efficient in killing the virus in patient's body, and the institute would be publishing a paper soon about the findings.

The IIBR was established in 1952 as part of the Israel Defence Forces' Science Corps, and later became a civilian organisation.

It is technically under the supervision of the Prime Minister's Office, but is in close communication with the defence ministry.

Israeli Prime Minister Benjamin Netanyahu is said to have ordered the institute to devote resources to develop a vaccine for COVID-19 on February 1.

"The biological institute is a world-renowned research and development agency, which relies on experienced researchers and scientists with great knowledge and quality infrastructures. There are now more than 50 experienced scientists working at the institute on researching and developing a medical remedy for the virus", it had said.

The normal process of development of such a vaccine requires a long process of pre-clinical trials on animals, followed by clinical trials. This period allows for a full characterisation of side effects and a better understanding of how different populations are affected.

Five shipments of virus samples arrived in Israel from Japan, Italy and other countries, news portal Ynet reported in February.

They were brought by a specially secured Defence Ministry courier to IIBR and had been frozen at -80 degrees Celsius.

There has been intensive work, including by leading experts, to develop the vaccine since then.

Experts believe that the length of time needed to develop a vaccine runs from a few months to a year and a half.

Numerous research teams all over the world are participating in the race to develop a vaccine for COVID-19. Many of them at this point are focusing on the way the virus presents itself in animals, with the biggest hurdle being the way it morphs when it moves from animals to human beings.

China released the genetic sequence of the virus on open scientific databases shortly after its outbreak in January so that research institutes and commercial companies could try to develop treatments and vaccines without requiring to obtain samples.

Many private companies have also made claims of having successfully developed treatment against COVID-19, but there isn't a proven track record on display yet.

The novel coronavirus, which first emerged in China in late December, has so far killed over 2.5 lakh people and infected more than 3.6 million globally.

Harinder Mishra
© Copyright 2020 PTI. All rights reserved. Republication or redistribution of PTI content, including by framing or similar means, is expressly prohibited without the prior written consent.