Is Sabrimala ready for Trupti Desai? 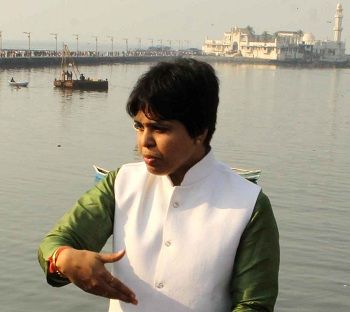 Trupti Desai and her Bhumata Brigade are unshakeable in their belief that women can and should go everywhere. Their fight has earned women the right to enter the inner sanctums of the Shani Shingnapur Temple, the Trimbakeshwar Shiva Temple as well as the Haji Ali Dargah.

Their next target is Sabarimala in Kerala. Aditi Phadnis reports. 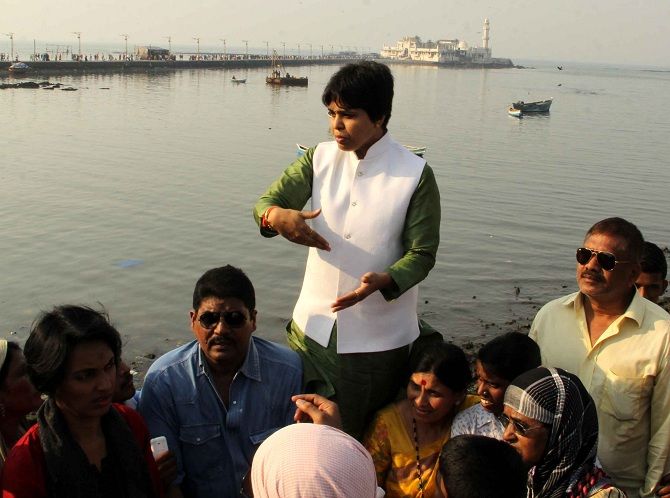 If Trupti Desai says she will do it, she probably will.

Founder of the 'Bhumata Brigade', she is a wife, a mother, and a feminist. "Our struggle is against injustice against women, subjugation of women and corruption," she says.

Bhumata Brigade does have some male members but it is the Bhumata Ranragani Brigade which takes up specifically women's causes, such as the temple protest.

Durga Shukre is a homemaker.

Priyanka Jagtap, 22, is preparing for the Maharashtra Public Services Commission examination, having joined the group when it was started.

These four make up the core group at the forefront of agitations.

Many would call Desai a rabble-rouser. Or a trade unionist in the tradition of leaders like Datta Samant or George Fernandes. She is unshakeable in her belief that women can and should go everywhere. It was this belief that propelled the Brigade to demand the right to enter the garbhagriha of the Shani Shingnapur temple in Ahmednagar, Maharashtra. Desai saw no logic or merit in the argument that men could enter the shrine after paying Rs 11,000, but women were barred from entry. "We are also devotees of Shani, and we just want the same rights as men for women of all castes."

"She's crazy," said Rajkaran Sharma of Chitrakoot, a rotund, reasonable priest, with whom it is not impossible to negotiate religious rites (at a particularly longwinded ceremony, he asked apologetically whether it was okay to continue or should he cut it short). But Sharma is very clear what religious convention and ritual mean, what ceremonies should be done by women and what can only be done by men. "Next, she will want women to perform the kanyadaan," he said of Desai's campaign.

With short hair, a jacket and only sometimes a bindi, Desai makes it clear that she is a woman on her own terms. "This (temple entry) is not about fighting religion; it is about equality," Desai told an interviewer. "They are saying their religious sentiments are hurt. How have they been hurt? Have we ever said there is no god? But, we have the right to access him as much as men."

This is not the first time Desai has tangled with authority. She launched a movement against the Pawar family-run Ajit Cooperative Bank over an alleged scandal in 2008. Around 29,000 people who thought they'd lost their money, kept in the bank, got it back after Desai launched an agitation against the banking practices of the organisation.

Then, too, she got death threats.

At the Shingnapur Shani temple entry, she was heckled, manhandled and threatened. But, religion as a means of liberation is a potent weapon and Desai is persuasive enough to have talked many women into joining the Bhumata Brigade and storming the temple.

Maharashtra Chief Minister, Devendra Fadnavis finally had to publicly endorse the entry of women in the garbhagriha of Shani Shingnapur; they were allowed in only after that.

The Brigade's next target was Mumbai's Haji Ali mosque. The Indo-Islamic architectural structure contains the tomb of Sayed Peer Haji Ali Shah Bukhari. And, women are barred from entering the sanctum sanctorum.

The Brigade went to the high court there, which ruled that the ban on women contravened their fundamental rights and that the trust had no right to prohibit women's entry into a public place of worship.

After the Haji Ali victory, Desai declared that Sabarimala in Kerala would be the next target -- and, that in its own interest, it should open its doors for women.

Although the Brigade's plan for storming the temple isn't clear, the announcement has set off an intense debate in Kerala. It is likely to be a life-altering moment for a state, which is highly literate. Some people think that Desai will win this battle as well.

For about 400 years, it was believed that Lord Shani might curse women if they enter the temple. A group of women activists, led by Trupti Desai, marched to the temple in January 2016, seeking entry to the inner sanctum. Though they did not get entry, in March, the Bombay High Court asked the Maharashtra government to ensure women are not denied entry to any temple. The temple administration gave clearance for the entry of women in April 2016.

The mosque and dargah in Mumbai was built in 1431 and following protests from feminist groups like Bharatiya Muslim Mahila Andolan and Bhumata Brigade demanding, equal rights to pray, it got national importance. On October 24 this year, the trust that manages the shrine informed the Supreme Court that women will be allowed entry in a month.

Built in the 5th century BC, it prohibits entry of women, as it is believed Lord Kartikeya is a brahmachari.

Will Kerala give way to modern times? 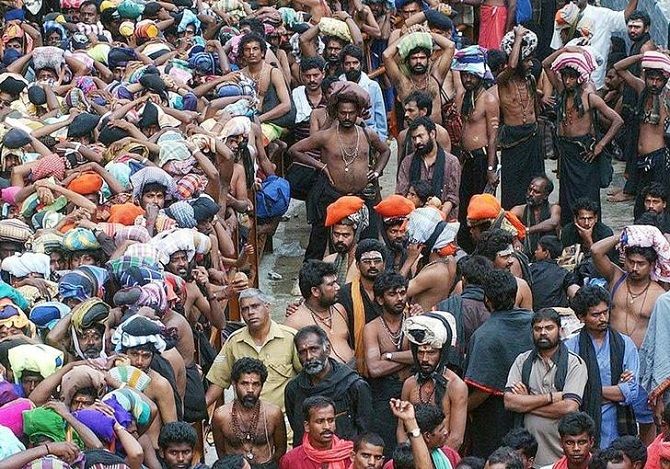 IMAGE: At the Sabarimala Temple. The Supreme Court is hearing arguments on women between the age of 10 and 50 years not being allowed to enter the temple. Photograph: Reuters.

Will an 1,800-year-old tradition give way to modern times? A question before Kerala society, with announcements that a group of women in the menstruating age group would enter the Sabarimala shrine in Pathanamthitta district this month.

By tradition, women between the age of 10 and 50 years are not allowed there, on the reasoning that the deity, Ayyappan, is celibate. The women's group, led by Pune-based gender rights activist Trupti Desai, has called for a march to allow the entry of women of all age groups on January 14. This comes as the Supreme Court is hearing arguments on the issue; the next hearing on February 20.

"We will never let Desai and her team set foot here in January. This is a question on the belief of millions of devotees who visit Sabarimala on an annual basis. The current government is trying to project themselves as progressive. We are not against women; of the 40-50 million pilgrims visiting every year, more than 5 per cent are women above the age of 50. People should understand that the deity, Ayyappan, is celibate. There will be huge problems within the state if they try to forcibly enter the shrine," Gopalakrishnan told Business Standard.

The pilgrimage in Sabarimala is held between November and January. Hindu organisations and Sabarimala piligrim bodies like the Akhila Bharatiya Ayyappa Seva Sanghom have come out in public against the move.

Desai and her Bhumata Brigade came in the limelight in 2015, when her campaign for women's entry at the Shani Shingnapur Temple succeeded, with a Pune district court directing the temple authorities to allow women in the shrine, based on their constitutional rights.

Later, she also spearheaded a campaign for women's entry into the MahalakshmiTemple in Kolhapur and the Trimbakeshwar ShivaTemple near Nashik.

The latest feather in her cap was entry into the Haji Ali Dargah in Mumbai.

It was in November that the Left Democratic Front government took a U-turn from the previous Congress government's stand, stating at the Supreme Court that gender discrimination should be done away with. There are differences even in the Travancore Devaswom Board regarding the entry of women. K Raghavan, a Communist Party of India (Marxist)-backed member of the board, has also supported the entry of women.

He also criticised the move to change the name of the temple. The temple authorities had changed the name from the Sabarimala Sree Dharma Sastha Temple to Sabarimala Sree Ayyappaswamy Temple in November. "It was inappropriate for two members of the board to make a decision on their own in the matter of change of name."

The issue has also triggered an online war. While activists seeking women's entry have came out with social media campaigns like 'Right to Bleed' and 'Right to Pray', other Hindu women organisations have entered the battle through a 'Ready to Wait' campaign.

Devaswom minister Kadakampally Surendran has said Desai and her team have not informed the government about their plans and the government will not allow forcible entry.

Traditionally, Sabarimala pilgrims stand apart, heralding their intention of undertaking the pilgrimage by their black clothes and strict preparations, including not having any non-vegetarian food for many days prior to the pilgrimage. It is believed that Lord Ayyappan meditated here after slaying the demoness Mahishi. The festival period is called Mandala Pooja and the Makaravilakku festival on January 14 attracts devotees' interest from across the world.

"Lord Ayyappan is a secondary incarnation of Mahavishnu. People must understand the seriousness of an 1,800-year-old tradition. Can women climb the heights of the Sabarimala hills? The presence of impure women will trouble the divinity of the temple. The posture of the deity itself is yogic. We, along with women valuing the tradition, will not let them touch this sacred land," Gopalakrishnan said. 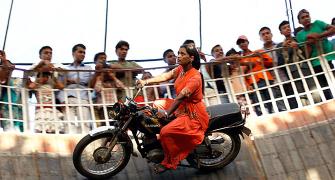 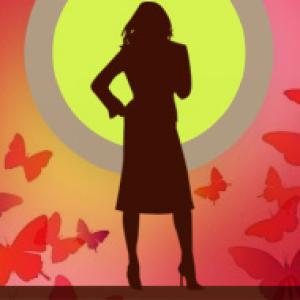