The home ministry can notify Google of the 'Voice of Punjab' app's hateful content and have it taken down from the Play store.
The glorification of Beant Singh's assassination alone is enough to have the app taken down.
Aveek Sen reports. 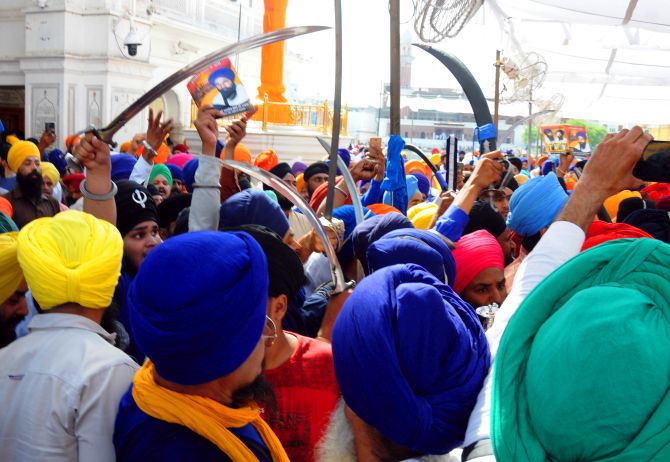 IMAGE: Sikh radicals brandish swords during the 35th anniversary of Operation Bluestar at the Golden Temple in Amritsar on June 6, 2019. Photograph: ANI Photo

An Android app, 'Voice of Punjab', is the latest weapon in the information war against India.

An app purportedly of the banned Khalistan group Sikhs for Justice, it contains Khalistani content -- one of the pictures on its app store page says former Punjab chief minister Beant Singh was 'stopped by blast' as he was a 'killer and torturer of Khalistani activists'.

Beant Singh was assassinated in a car bombing on August 31, 1995, in Chandigarh.

The app says Punjab Chief Minister Captain Amarinder Singh will be 'stopped by the ballot', but has a suggestive bullet shaped half in the form of a pen.

As per the Google Play store's details about the app developer, 'Voice of Punjab' has been designed by IceTech, a Romanian Web design company. There are some pictures about the app on its page in the Play store, as is usual for any app.

These pictures are screenshots, and on the top left it has the name of the mobile network, in this case Pakistan's Jazz'Mobilink, establishing that someone in Pakistan is coordinating the app page.

The icon of the same mobile service provider, Jazz'Mobilink, also featured in screenshots on the '2020 Sikh Referendum' mobile app, another Sikhs for Justice app.

That app was taken down in November by Google after the Punjab government complained to the California-based company.

Referendum 2020 is a campaign by the outlawed Sikhs for Justice group to call a referendum on whether Punjab should be a part of India or not.

Both the 'Voice of Punjab' and 'Referendum 2020' apps have been created by the same Romanian company.

Sikhs for Justice was banned by the Union home ministry under the Unlawful Activities (Prevention) Act.

Sikhs for Justice operates out of the US. Gurpatwant Singh Pannun, a law graduate from Panjab University and currently an attorney in the US, is the face of Sikhs for Justice and its legal adviser.