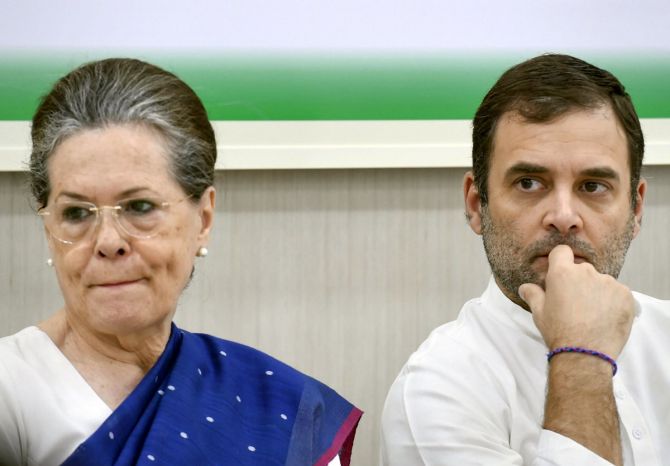 Amid a turmoil within the Congress, some leaders feel the party is far from hitting top gear in preparing for the Bihar assembly polls, but senior party functionaries involved in strategising for the elections are confident of sealing an alliance with "like-minded parties" soon and putting up a good show.

The assembly elections in Bihar are likely to be held on time in October-November despite demands by some political parties for postponing the polls in view of the COVID-19 pandemic.

These elections are being seen as the next big political fight between the Bharatiya Janata Party-led National Democratic Alliance and a combined opposition force.

While the Congress as such is not in a position to lead the opposition alliance in Bihar with its ally Rashtriya Janata Dal having a relatively much larger base, some within the party feel its electoral and even seat-bargaining prospects may take a hit due to the ongoing turmoil over the central leadership and other organisational issues raised by a group of leaders.

The appointed party office bearers, however, asserted that the controversy surrounding the letter written by 23 leaders to party chief Sonia Gandhi seeking organisational changes will in no way impact the party's preparations for the Bihar polls.

Also, all parties need to evolve novel campaign strategies for an election to be held under the coronavirus pandemic protocols.

Various political equations are also changing fast with all eyes glued to whether Nitish Kumar, who has been at the helm for about 15 years barring a brief period when Jitan Ram Manjhi replaced him, will hold his ground or get challenged by the opposition 'grand alliance'.

But cracks have begun appearing in the opposition grand alliance with Hindustani Awam Morcha's Manjhi already exiting the group.

Asked about alliance and seat-sharing talks in the opposition camp, AICC in-charge for Bihar, Shaktisinh Gohil, said they were moving in the right direction and "appropriate things happen at appropriate time".

"We want all like-minded parties to fight together and work is moving in that direction. I am confident that in every good atmosphere we will have an alliance," he said.

Asked if Rahul Gandhi will lead the campaign in the Bihar polls, Gohil said his leadership is for the whole country and "we would want him to give maximum time in Bihar."

On the controversy surrounding the letter by the 'group of 23' and whether it has taken the party's focus away from polls, he said this will not affect the Bihar elections.

"The Congress has internal democracy under which this happened, it (letter) should not have been leaked to the media and should not have panned out the way it did. But after the CWC meeting, it is not an issue and will not impact (preparations for) Bihar polls," Gohil said.

He said talks for seat sharing were on and an alliance will be soon finalised.

Asked if it was certain the Congress would contest more than the 41 seats it had fought in the last assembly polls, he answered in the affirmative.

Sources said the Congress will also hold a slew of virtual rallies in the coming weeks.

However, not all Congress leaders from Bihar feel the party is battle-ready for the polls.

Kirti Azad, a senior party leader from Bihar, said the campaign should have been in the top gear already, but that is "unfortunately not there" for the Congress.

"There are a lot of disadvantages at the moment. One is that you cannot go and hold public meetings, you have to do virtual meetings. The BJP is far ahead because they have been doing this, they have got the money, they have got the system and had started in June," he said.

Azad, who switched over from the BJP to the Congress ahead of Lok Sabha polls last year, also indicated that he was not being kept in the loop regarding the strategising for polls.

Bihar Congress' working president Kaukab Quadri also said that the party's preparations were not up to the mark and it was lagging behind opponents.

"There was a need to bring about changes after assessment of the result of Lok Sabha polls in Bihar. But that did not happen. Despite such a grand alliance, we neither got seats nor the vote percentage we expected," he said.

He said the party now needs to focus on finalising seat-sharing soon and select appropriate candidates keeping in mind dynamics of seats to turn the fortunes around for the party.

He also cast aspersions on the Kushwaha-led Rashtriya Lok Samta Party's loyalty to the grand alliance, saying there is no guarantee that it will not go over to the BJP after the polls.

In the 2015 polls, the Congress had won 27 out of the 41 seats it contested, while the Janata Dal United-RJD-Congress alliance secured 178 seats in the 243-member assembly.

The RJD had emerged the leader of the pack with 80 seats while the JD-U bagged 71, both of whom had contested 101 seats each.

While Nitish Kumar became chief minister of the grand alliance government after the 2015 polls, he and his party later switched sides to join the NDA in 2017.

The term of the Bihar assembly comes to an end on November 29.

Asim Kamal
© Copyright 2023 PTI. All rights reserved. Republication or redistribution of PTI content, including by framing or similar means, is expressly prohibited without the prior written consent.