News
Business
Movies
Sports
Cricket
Get Ahead
Money Tips
Shopping
Sign in  |  Create a Rediffmail account
Rediff.com  » News » US Air Force 'running out of bombs' to drop on ISIS!

US Air Force 'running out of bombs' to drop on ISIS!

The US Air Force is fast running out of bombs to drop on ISIS targets in Syria and Iraq after its pilots fired off over 20,000 missiles and bombs since the US bombing campaign against the terror group began 15 months ago, its chief has said. 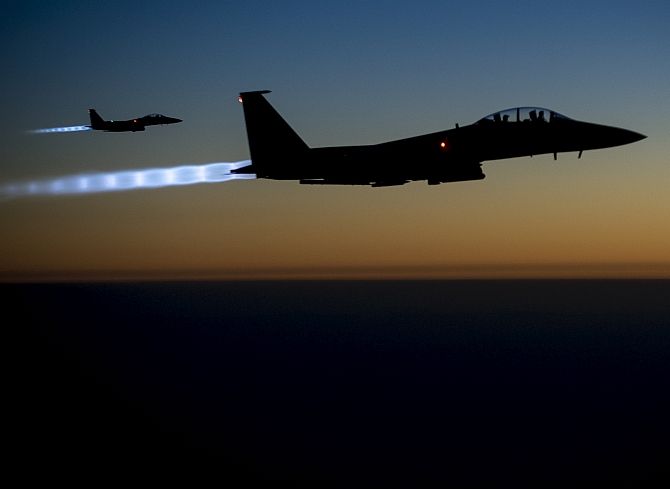 As America ramps up its military campaign against the Islamist terror group, the Air Force is now "expending munitions faster than we can replenish them," Air Force chief of staff General Mark Welsh said.

"B-1s have dropped bombs in record numbers. F-15Es are in the fight because they are able to employ a wide range of weapons and do so with great flexibility. We need the funding in place to ensure we're prepared for the long fight," Welsh said in the statement.

"This is a critical need," he said.

The bombing campaign has left the US Air Force with what an Air Force official described as munitions depot stocks "below our desired objective."

The Air Force has requested additional funding for Hellfire missiles and is developing plans to ramp up weapons production to replenish its stocks more quickly. But replenishing that stock can take "up to four years from time of expenditure to asset resupply," the official told CNN.

"The precision today's wars requires demands the right equipment and capability to achieve desired effects. We need to ensure the necessary funding is in place to not only execute today's wars, but also tomorrow's challenges," the official said.

The Air Force's publication of the number of missiles and bombs dropped comes amid continued criticism from Republicans -- in particular those running for president -- who insist the Obama administration has been too timid in the fight against ISIS, with many on the right calling for the US to loosen the rules of engagement and lead a more aggressive fight against the militant group.

American pilots have fired weapons in less than half of the nearly 18,000 sorties they have in the first 10 months of 2015, according the latest figures available.

That's up from 2014, when pilots fired their weapons just one third of the time, the report said.

Source: PTI© Copyright 2021 PTI. All rights reserved. Republication or redistribution of PTI content, including by framing or similar means, is expressly prohibited without the prior written consent.
Related News: US Air Force, ISIS, Mark Welsh, CNN, Hellfire
Print this article