Jordan has confirmed the death of pilot Mu'ath Safi Yousef al-Kaseasbeh after a video published online by Islamic State claimed to show him being burned alive.

ISIS supporters shared a video on social media showing the 26-year-old first lieutenant in Jordan's air force being led out into a square in front of a squadron of masked men, before being placed in a cage. A rope lying outside the cage is then lit up, and the hostage is engulfed by flames.

The video seemed to have been a carefully-staged production, shot from several angles, and sound tracked with religious hymns.

Kasaesbeh was captured in December after his F-16 fighter jet crashed in territory controlled by the militants in Syria. Later that month, the extremist group released what it said was an interview with the captured pilot in its online magazine.

ISIS had been demanding the release of Sajida al-Rishawi, a convicted female Iraqi jihadi on death row in Jordan, in exchange for Kassasbeh's life.

Sajida al-Rishawi was sentenced to death by a Jordanian court following her role in the deadly 2005 attack on Amman’s Radisson SAS Hotel. Jordan had indicated throughout the week that it was willing to release al-Rishawi, but the government in Amman insisted on receiving proof that al-Kaseasbeh was alive.

A Jordanian security source told Reuters post the pilot's killing that Rishawi would now be executed "within hours".

Al-Kaseasbeh was a member of a prominent family in Jordan.

The news comes just days after ISIS' British executioner in chief, Jihadi John, savagely murdered Japanese journalist Kenji Goto in a shocking filmed beheading after days of intensive negotiations through intermediaries to save him.

Jordan, which has been mounting air raids in Syria as part of the US-led alliance against Islamic State insurgents, would deliver a "strong, earth-shaking and decisive" response, a government spokesman said.

"The revenge will be as big as the calamity that has hit Jordan," army spokesman Colonel Mamdouh al Ameri said in a televised statement confirming the death of the pilot, who was seized by Islamic State in December.

Meanwhile, Jordan's King Abdullah cut his visit to the US short following the news of the pilot's killing.

In a statement, he said that the pilot had died defending his beliefs, homeland and nation.

"Today we stand shoulder to shoulder with the family of the martyr hero Moaz, with our people and our armed forces in this tragedy," he added.

"At these difficult times it is every Jordanian's duty to stand together in the face of crises and ordeals, which will only make us stronger."

Reacting to the shocking incident, US President Barack Obama said that the act just shows the organization's "barbarity."

"It's just one more indication of the viciousness (and) barbarity of this organization," Obama said.

"This organization is only interested in death and destruction," he said when asked about the video at a brief public appearance.

He said the United States would "redouble the vigilance and determination on the part of the global coalition to make sure" the IS group is "ultimately defeated." 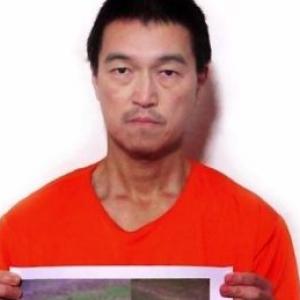