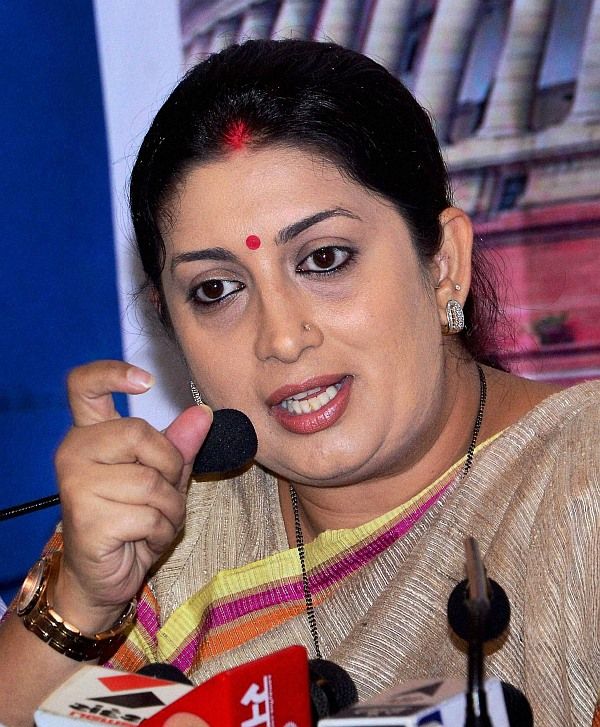 The Election Commission and Delhi University were on directed by a Delhi court to bring the records of educational qualification of Union Human Resource Development Minister Smriti Irani against whom a complaint was filed for allegedly giving false information in affidavits to the poll panel.

Metropolitan magistrate Akash Jain allowed the plea of the complainant seeking a direction to the officials of EC and DU to bring records of Irani's educational qualification after, he said, he was unable to place them before the court.

"Keeping in view the grounds mentioned in the application, the plea to direct officials of the Election Commission and Delhi University to bring records is allowed," the court said.

It, however, declined the contention of complainant Ahmer Khan, a freelance writer, seeking direction to the Central Board of Secondary Education to bring Irani’s Class X and XII records.

"The plea to direct the CBSE to bring records of Class X and XII is declined as it is not under challenge. Put up the matter for pre-summoning evidence on March 16, 2016," it said.

The complainant had earlier claimed in the court that Irani had deliberately given discrepant information about her educational qualification in affidavits filed before the poll panel and had not given any clarification despite concerns being raised on the issue.

Khan had alleged that Irani had knowingly furnished misleading information about her educational qualification in the affidavits and a candidate deliberately giving incorrect details can be punished under the provisions of the Indian Penal Code and under Section 125A of Representation of the People Act.

Section 125A of the RPA deals with penalty for filing false affidavit and entails a jail term of up to six months or fine or both.

The court on June 24 had taken cognisance of the complaint which accused Irani of furnishing false information about her academic qualifications in the affidavits filed before the EC in 2004, 2011 and 2014.

The complainant had earlier claimed in court that in her affidavit for April 2004 Lok Sabha polls, Irani had said she completed her BA in 1996 from DU (School of Correspondence), whereas in another affidavit of July 11, 2011 to contest the Rajya

Sabha election from Gujarat, she had said her highest educational qualification was B.Com Part I from the School of Correspondence, DU.

The complaint also alleged that in the affidavit filed for nomination of April 16, 2014 Lok Sabha polls from Amethi constituency in Uttar Pradesh, Irani said she had completed B.Com Part-I from School of Open Learning, DU.