Smriti Irani, whose meteoric rise in the Bharatiya Janata Party saw her become the human resource development and information & broadcasting minister before being divested of these portfolios, on Thursday emerged as a giant-killer -- this time scripting a historic win by dethroning Rahul Gandhi on the Congress's home turf. 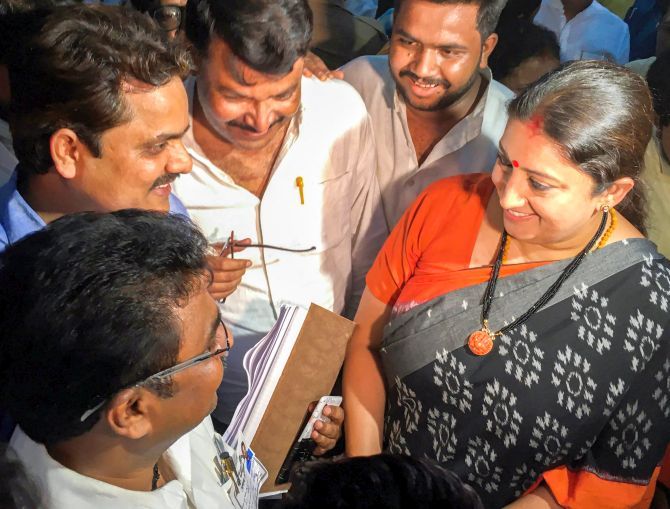 The 43-year-old popular television actor-turned politician continued to cultivate Amethi in the past five years despite her loss in 2014 to Gandhi and this helped her reap electoral dividends.

Throughout her campaigning, Irani asserted that people of Amethi want change and development and will vote for Modi.

Irani courted quite often, be it her educational qualification or her stint in the Union Cabinet.

In her affidavit for the 2014 polls, she had said she graduated from Delhi University in 1994, triggering a row over the veracity of her claim, with opposition parties alleging she was not a graduate.

Irani became the youngest cabinet minister in 2014 after the BJP gained a massive victory in the Lok Sabha polls that year and was assigned the high-profile HRD portfolio. However, she was shifted out of HRD ministry to Textiles after a two-year tenure replete with controversies.

Her stint as the information & broadcasting minister was also controversial -- from reportedly fighting with the Prasar Bharti Board to issuing a notification on 'fake news', which was apparently withdrawn at the behest of the PMO.

During her campaign in Amethi this time, Irani was often locked in a war of words with Congress general secretary Priyanka Gandhi Vadra, who dubbed her as an "outsider". Last month, Priyanka accused her of distributing shoes in order to "insult" Rahul and said the people in the Congress chief's Lok Sabha constituency are not beggars.

Irani pulled off one of the biggest upsets in the 2019 Lok Sabha polls. Political pundits are of the opinion that Rahul also chose to contest from Wayanad in Kerala anticipating a tough fight in Amethi.

An eloquent speaker, Irani was often the BJP's first choice for addressing the party's press conferences and defending it during debates in Parliament.