'Like my father': Anchor amid row over IPS officer seen beating wife

Madhya Pradesh government on Tuesday suspended a senior IPS officer seen beating his wife in a viral video, after being confronted by her at the flat of a regional TV channel's news anchor. 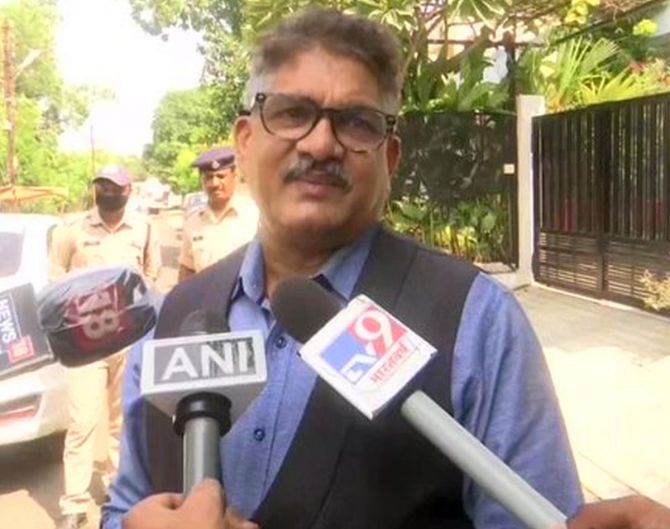 Purushottam Sharma, a 1986 batch IPS officer, was on Monday issued a show-notice by the state home department which had asked to submit his reply by 5 pm on Tuesday.

"Sharma's reply to the notice was found unsatisfactory and as a result he has been suspended from the post of special director general with immediate effect," Additional Chief Secretary home Dr Rajesh Rajora said.

The suspension order came a day after the news anchor filed a police complaint against the wife and son of the IPS officer, accusing them of tarnishing her reputation.

The anchor submitted a complaint against Sharma's wife and son at the Shahpura police station, and claimed that the IPS officer is "like a father" to her and calls her 'beta'.

"The complaint states that her privacy and image has suffered a lot in the society and caused disrepute to her name," Shahpura police station in-charge Jitendra Patel said.

The anchor has demanded that police take appropriate action in the matter and protect her from undergoing "mental torture."

"As I am associated with journalism, I keep meeting officials and politicians quite often," she said in her complaint.

"On Sunday (September 27), DG Purushottam Sharma called me around 7 pm, saying he is near my place (residence), so I invited him over for a cup of tea," she said.

The anchor said some time later, Sharma's wife also reached her flat and rang the doorbell. "I dont know her but I opened the door out of courtesy, after which she forcibly entered the flat," she added.

Sharma and his wife had a fight, after which the IPS officer went out of the house," she said.

She claimed that Sharmas wife stayed back and asked her "unnecessary questions" and also made a video-recording of her bedroom, which was made viral on social media by Sharma's son, making "baseless allegations" against her.

"DG Saab (Sharma) is like my father and he used to call me 'beta'," the anchor said.

"I never realised that his coming to my home for a cup of tea will become such a big issue. It has tarnished my image and compromised my privacy," she said in the complaint.

The police station in-charge said that as this is a matter of causing disrepute to someones image, a complaint can be filed only in court.

The order to remove Sharma from the post of Director Public Prosecution and transfer him to the state secretariat without assigning him any post was issued by the state home department Under Secretary Annu Bhalavi on Monday.

"Two videos related to you went viral on social media in which prima facie you are seen engaging in immoral behaviour and domestic violence with your wife," a show-cause notice issued by Bhalavi to Sharma had said.

"Your actions are in violation of the All India Services rules and therefore, you are directed to give your clarification on why disciplinary action should not be taken against you for your acts," it had said.

The government has asked Sharma to submit his reply by 5.30 pm on Tuesday, failing which it will be construed that he doesn't have any response to file and accordingly action will be initiated against him, the order had said.

Sharma, who has been married for 32 years, had said, "This is a family matter, not a crime...I am not a criminal. My wife stalks me wherever I go. I am dealing with this."

The state women's commission has summoned Sharma on October five and also directed it to provide security to his wife.