Chhattisgarh, at the centre of the Maoist corridor and which has borne the brunt of vicious naxal attacks in recent times, wants an integrated action plan for development to check the Left Wing Extremism in the country.

Chhattisgarh Chief Minister Raman Singh also feels that gun alone cannot be the solution for the Maoists problem. "Our geographical location is such that we are in the centre of two major naxal corridors -- east to west and north to south -- which pass through our state. If we block it, the naxal movement will break down in all the affected states -- Orissa, Maharashtra, Andhra Pradesh, Jharkhand and West Bengal," he told PTI in an interview.

At least 76 security personnel were killed in one of the naxal attacks on April 6, last year in Dantewada district of the state. Stressing that battle against naxals cannot be won solely with military action, Singh advocated strong time bound development plan to increase connectivity, education and medical facilities in the LWE affected areas in all the adjoining states.

"We have suggested three points in the integrated action plan -- to build national and state highways, to build inter- state bridges, and to build schools, PDS shops and other infrastructure which, in any condition, be completed within four years simultaneously in all the states. This will improve connectivity and movement across the states," he said. Singh also accused naxals of fleecing about Rs 300 crore on the pretext of providing protection money to tribals of the State.

Singh sought land reforms in Maoists-affected regions and more powers for civic and local bodies in these areas. "There should be land reforms, panchayats should be given more rights, and forest committee should get more rights. We need national consensus on such developmental issues," he said. Singh said funds are not a problem either with Chhattisgarh or with other neighbouring states to complete development works.

"We need security to complete these projects. We start building them and they blast them thus increasing costs by three folds," he said. Singh criticised the attitude of terming naxal problem as states' law and order problem. "When it comes to terrorism in Jammu and Kashmir or insurgency in Northeast, entire nation galvanises to fight it while naxals are termed as state's law and order problem. The analysis of casualties show that naxals have claimed three times the lives claimed in terrors attacks during last eight years," the chief minister said.

He said since Chhattisgarh is at the centre of fight against naxals, it is bearing the maximum brunt of it. "But we cannot back off. Whatever we are doing, it is for our nation," he said. "Rs 1,000 crore is the total worth of minor jungle produce annually. The money collected by the government go into their welfare. They (naxals) do not talk on this. We provide Rs 800 per sack of tendu leaves and Rs 130 as additional bonus. They take money from people on this. "If they are taking Rs 300 crore from the state annually (as protection money), they should spend atleast half the amount on them. But they are only buying guns," Singh said.

Singh suggested structural changes in the police to make it capable to fight Maoist violence. "Police is not structurally made for guerrilla war. It is basically for law and order problem. There is still no police station for 200-300 km in the state. These all problems led to Naxalism. New police stations are being opened and people are being trained," he said.

Criticising the naxals for not coming to talks' table, Singh said "their top leadership is from Andhra Pradesh. Local recruitment is done from the state. When these locals come back we offer land and job, make them special police officers and provide security to them and their families".

"We give money ranging between Rs 5-7 lakh to naxals based on the type of weapons they surrender with. However, it does not yield very good result because they have apprehension of getting killed after leaving naxalism," he said. Speaking on other issues, Singh supported formation of "right-size states" for development. "I want new states to be formed. I am a supporter of smaller states. Be it talks of formation of Vidarbha, I feel it should be made. And if there are talks of making a separate Telangana separate from Andhra Pradesh, I feel it should be there," he said. However, he emphasised upon proper division of available resources in new states.

To a question over providing security to investors in the state, he said "It is not a major problem for industrialists. People from outside feel that there are security issues in the state. But as a CM of the state, I feel Chhattisgarh is the safe and best destination for investment". Singh said his government has stopped signing Memorandum of Understandings (MoUs) for past year-and-a-half to shape existing investments. "There are several people who want to invest in the state. If they want to do in downstream, they are welcome. But we are not interested in doing MoUs in steel, aluminum and cement," he said.

Singh also suggested better coordination among government agencies to decide on 'go' or 'no-go' areas for mining. "The government of India should decide on 'go' and 'no-go' area for mining from the starting. It should not be decided at the last moment. It is a matter of planning that environment, forest and water (related issues) needs to be considered together and well before granting permission for setting up businesses," Singh said. "What happens is that when an investor is ready to start its operation then all difficulties come up which is ultimately a national loss," Singh added. 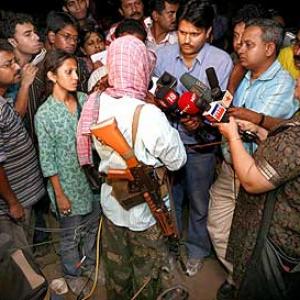