BJP-led alliance all set for second term in Assam

The Bharatiya Janata Party-led alliance in Assam is all set to form the government for the second successive term winning 74 of the 102 seats declared so far and is leading in one other. 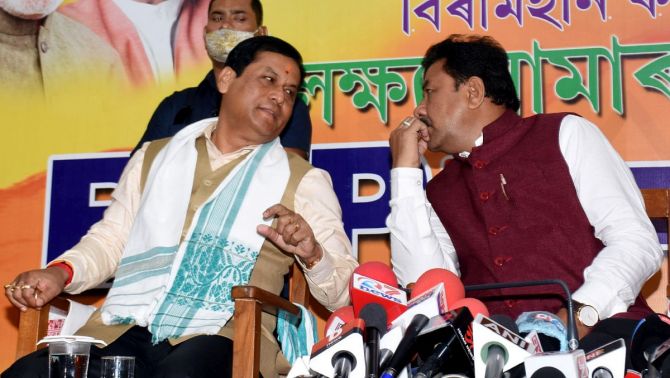 The opposition 'Grand Alliance' comprising the Congress, All India United Democratic Front and eight other parties, have won 50 seats.

The results of one of the 126 assembly constituencies were yet to be declared till 4 am.

The BJP has won the largest number of 59 seats and is leading in one other, while its allies the Asom Gana Parishad has won nine seats and the United People's Party, Liberal has won in six.

The Congress has won 29 seats. Its allies the AIUDF has won 16, the Bodoland People's Front has won four seats, while the Communist Party of India-Marxist bagged one seat.

Among the prominent candidates who won are cabinet minister Himanta Biswa Sarma, who retained his Jalukbari constituency for the fifth consecutive term by defeating his Congress opponent Romen Chandra Borthakur by 1,01,911 votes.

Among the prominent losers is Congress state unit president Ripun Bora who was defeated by BJP's Utpal Borah in Gohpur by 29,294 votes.

BJP ministers Ranjit Dutta from Behali, Sanjoy Kishan from Tinsukia, Jogen Mohan from Mahmara and Bhabesh Kalita from Rangiya retained their respective seats, while two new faces Taranga Gogoi from Naharkatiya and Rupesh Gowala from Doomdooma made their debut on the party 'stickets..

Another Congress turncoat Gautam Roy who contested as a BJP candidate, lost to Congress candidate Khaliluddin Mazumdar in Katigora by 6939 votes.

The new political Assam Jatiya Parishad faced a rout failing to win a single seat and its president Lurinjyoti Gogoi lost from both the constituencies he contested.

The BPF, a part of the outgoing government and had joined the Grand Alliance after the BJP severed its ties with it, won four seats but all its three ministers - Pramila Rani Brahma, Chandan Brahma and Rihon Daimary lost to their respective UPPL rivals.

Assam has a 126-member assembly and 64 seats are needed for a simple majority.