Source: PTI
January 17, 2011 19:09 IST
Handing over of United Liberation Front of Asom general secretary Anup Chetia to India, cooperation in anti-terror steps and firing along the international border will be high on the agenda during the home secretary-level talks between India and Bangladesh beginning Wednesday.

The Indian delegation, led by Union Home Secretary Gopal K Pillai, will engage in extensive deliberations with the Bangladesh team, headed by Bangladesh Home Secretary Abdus Sobhan Sikder, on all bilateral security issues during the two-day dialogue in Dhaka.

Pillai is expected to take up with Sikder the issue of early handing over of Chetia, who has completed his sentence in Bangladesh, to India so that he can participate in the proposed peace talks with the banned outfit. Chetia has been languishing in a Dhaka jail even since his arrest on December 21, 1997. ULFA chairman Arabinda Rajkhowa has also asked government to take steps for the early return of Chetia.

Both the delegations will discuss cooperation in anti-terror measures and how to broaden the intelligence-sharing mechanism between the two countries to check activities of terror outfits.

Dhaka is expected to raise the issue of border shootouts as Sikdar has already declared that their main focus will be the non-stop killing of Bangladeshi citizens around the borders.

Sources in New Delhi said Indian security forces were deployed along the international border to guard illegal infiltration, smuggling and other illegal activities and any action of their part was within the jurisdiction of law. 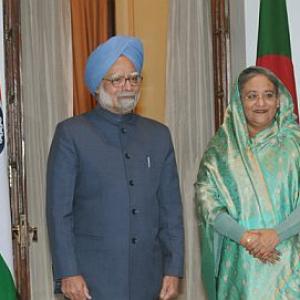