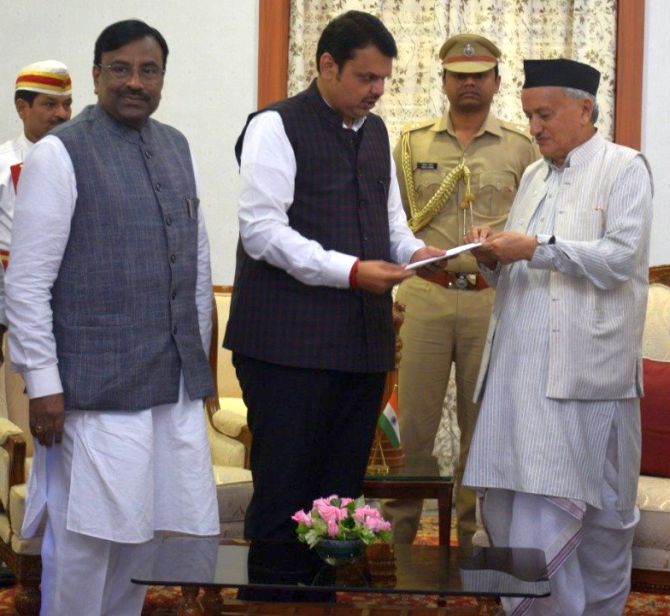 Maharashtra Governor Bhagat Singh Koshyari on Saturday evening asked the Bharatiya Janata Party, the single largest party in the state, to 'indicate willingness and ability' to form government, creating hope that the 15-day-long political impasse in the state will end.

The BJP's core committee will meet on Sunday and decide the future course of action, party leader Chandrakant Patil said.

The term of 13th Legislative Assembly of the state is due to end on Saturday midnight.

"We have just received the letter from the governor," Chandrakant Patil, who is state BJP president, told PTI.

"Our core committee will meet tomorrow and discuss the future course of action," he added.

According to Raj Bhavan statement, the governor asked Devendra Fadnavis, who is the leader of the state BJP's legislature wing, to 'indicate the willingness and ability of his party to form the government'.

'Elections to the Maharashtra Legislative Assembly were held on October 21 and the results were declared on October 24.

'However, despite the passage of 15 days, no single party or alliance of parties has come forward to form the government,' the statement said.

"The Governor has therefore decided to explore the possibility of formation of Government and today asked the leader of the elected members of the single largest party, that is BJP, to convey its willingness and ability to form the government," it further said.

"At least the Governor has begun the process of exploring for government formation. The BJP is the single largest party and the rightful claimant to form government first," Raut said.

Its ally Shiv Sena has won 56 seats, but the two parties are bickering over chief minister's post.

On Friday, after Fadnavis resigned as chief minister and was asked by the governor to continue as caretaker CM, the two allies had a bitter showdown over what had been decided mutually about the chief minister's post during their pre-poll negotiations.

While Fadnavis claimed that the BJP had never promised to share the chief minister's post with its ally, Shiv Sena chief Uddhav Thackeray maintained that assurance of equal sharing of all posts had been given, and the BJP must not portray him as a liar.

The Shiv Sena has shifted most of its 56 MLAs to a hotel in suburban Malad, apparently to guard them against 'poaching' attempts.

As many as 35 of the 44 Congress MLAs are in Jaipur, in Congress-ruled Rajasthan. A party legislator told PTI seeking anonymity that more MLAs are expected to join them.

All India Congress Committee general secretary Mallikarjun Kharge and Maharashtra Congress president Balasaheb Thorat will meet them in Jaipur on Sunday, he said.

"The MLAs will be coming to Mumbai on Monday. The meeting may happen a day later," the source said.

Earlier on Saturday, Pawar reiterated that the BJP and Shiv Sena should take initiative collectively to form government as they have people's mandate.

Uddhav Thackeray, who met the media on Saturday to give his reaction on the Ayodhya verdict, sidestepped a question about government formation.

"That will happen. Don't worry. Today is a joyous day," he said, welcoming the SC judgment.

According to Anant Kalse, former principal secretary of the Maharashtra Legislature, till the governor does not summon the new (14th) Assembly, it will remain in 'suspended animation'. 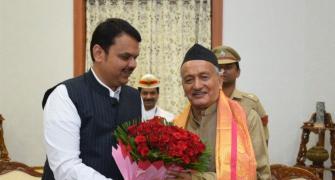 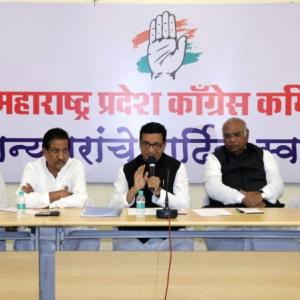