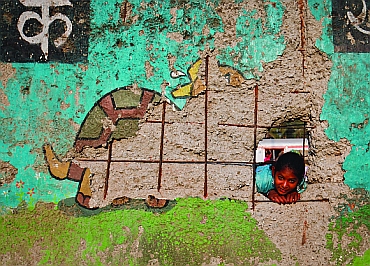 More men and fewer girls in a population has disastrous effects not only on the social life, but also the economic vibrancy of a country, a study conducted in India by the Connecticut-based Fairfield University, has found.

Done in consultation with the Office of Ambassador-at-Large for Global Women's Issues, Melanne Verveer at the Department of State and in partnership with St Xavier's College, Mumbai, and Loyola College, Chennai, the study surveyed families within the upper layer of the lower class and lower layer of the middle class.

The study noted that according to India's 2011 census, there were 914 girls born for every 1,000 boys; in some regions the numbers reached as low as 824 girls. These figures are alarming in comparison to the United Nation's 2010 Population Sex Ratio norm of 101.7 males to 100 females.

It also found that the sex imbalance ratio was on the rise, and that male child preference in India was prevalent among people of all religions, all economic classes. The imbalance had considerable ramifications on India's economy and also led to an increased threat of violence in society, it noted.

Rajan, who developed the idea for the research endeavor, said, "The sex ratio imbalance is well-known. What makes this study important is that it tries to look deeper in to the reasons for that."

Unlike past studies that were exclusively quantitative in nature, this survey included qualitative components to better understand how gender dynamics and family pressures led to the birth of a significantly greater number of boys.

The study found that many believed boys would be better wage earners and more likely to take care of parents. It also found that elders in the family and husbands preferred a male child, while wives said they had little choice in the matter. However, many wives also said daughters would be better caregivers than sons.

The research also found that girls were being systematically devalued in society, and the intensity of the problem was growing with advancing technology. With miniature sonogram machines that can be hidden even in rickshaws readily available, the crisis had deepened. The Indian government's attempts to stop sex selection had been unable to change attitudes successfully.

"This is a shame for our country," Rajan said. "This study finds that better access to education and employment prospects will demonstrate to families how to elevate the value of women and girls in society."

The problem, the study discovered, was less acute in India's southern states where the literacy levels are higher.

The study took 10 months to complete. More than 60 graduate students conducted the field survey. The interviews were conducted by two students, a male and a female. The male student would speak to the males, while the female student will interview the females.

"When we felt that people were hiding facts or lying, we tried to eliminate that answer," Rajan said. The study, however, could not delve into the methods used to keep the number of the girls fewer, as it would be illegal.

The researchers hope to answer these questions in the Phase II of the study, which is expected to take place over the next three to five years.

"The findings of the pilot study have given us confidence to move to a scaled-up Phase II level with seven Jesuit-run colleges in India (in major Indian cities)," said Rajan.

Reverend Jeffrey P von Arx, SJ, president, Fairfield University, said the next phase of "Impact India" would also involve expanding the number of Indian families surveyed to 2,000 to 3,000 in each city.

This broadened scope is expected to yield data that can provide evidence-based results and create viable, sustainable pathways to enhance the value of women and girls in society.

Girls and the Indian metropolis

Impact India 2021: Elevating the value of women and girls in society highlighted the differently thought processes in two of India's biggest cities -- Mumbai and Chennai.

A majority preferred to have two children, a male first, followed by a girl. But in both cities respondents said the elders preferred a boy irrespective of the number of pregnancies.

This perception was strongest among males in Mumbai.

Couples in Chennai reported a stronger desire than Mumbai couples for their next child to be female. Mumbai husbands indicated a preference for sons, while their wives indicated the need to comply with the wishes of their husbands and elders.

There was a strong perception that boys would earn more than girls in Mumbai, but Chennai respondents estimated it would be the same.

In many of the Muslim families interviewed, women revealed that they were at the mercy of their husbands and fathers-in-law for financial and emotional support.

For the most part, their husbands were not aware of the subtle pressure exerted by the fathers-in-law. On the other hand, many Hindu and Christian wives reported greater acceptance by their husbands in decision-making processes.

Image: A girl looks out of a broken wall near railway tracks in Mumbai