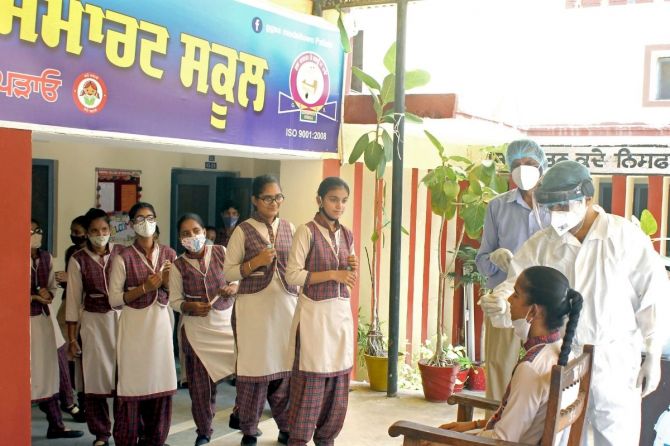 IMAGE: A health worker collecting sample from a student for COVID testing at a government smart school in Patiala, August 12, 2021. Photograph: ANI Photo

The active cases now comprise 0.39 per cent of the total infections, the lowest since March 2020.

The average recovery rate for the country stands currently at 98.26 per cent, the highest since March 2020, the health ministry said.

A decrease of 390 cases has been recorded in the active COVID cases in the last 24 hours.

The daily positivity rate was recorded to be 0.90 per cent -- less than two per cent in the last 41 days.

The weekly positivity rate was recorded to be 1.01 per cent, which has been below 2 per cent for the last 51 days, according to the health ministry.

The number of people who have recovered from the disease increased to 3,38,37,859, while the fatality rate stood at 1.35 per cent.

The number of COVID-19 vaccine doses administered in the country so far has exceeded 112.01 crore.

The 285 new fatalities include 174 from Kerala and 49 from Maharashtra.

Kerala has been reconciling COVID deaths since the last few days, hence the death tally of the state is high.